In the past, conservatives might argue that CNN’s Jake Tapper was one of the more noticeably even-handed anchors, one who might throw Democrats a question they didn’t want. But in the Trump era, that reputation vanished into Jeff Zucker’s demands for 24/7 anti-Trump partisanship.

TV Newser reported Tapper gave an interview to liberal journalist Kara Swisher as he promoted his latest novel, and he made the mysterious argument that he’s so much different than Don Lemon. 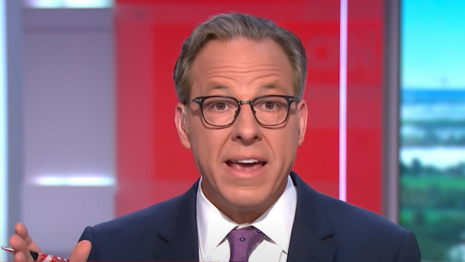 "I see my role as not being particularly opinionated except for things about which I think it’s fine to have an opinion such as truth and facts and just basic decency," Tapper explained. "But I’m not out there saying, this tax bill needs to be this or this particular legislation needs to pass. That’s not my style."

Wrong: CNN anchors are all opinionated. It’s in the corporate strategy now. They’re all dropping opinion bombs in commentary segments. Tapper is Lemon, and Cuomo, and Keilar. They’re all a blur of Democrat rhetoric.

Tapper’s statement can be refuted simply by looking at how he covered the conventions last year. For example, he came out of Vice President Pence’s convention speech firing rhetorical missiles at how Pence “whitewashed” the Trump record…but he came out of the Kamala Harris speech oozing about how her candidacy was historic and inspirational and how much it means to women and girls.

Then there's the election results. When Trump lost, Tapper cited the Gerald Ford quote from after Watergate: “Our long national nightmare is over.” Tapper’s alleged preference for truth and facts and decency was blatantly applied to the Biden-Harris ticket.

“We'll see how much congressional Republicans are willing to meet President-elect Biden and Vice President-elect Harris on this field of decency and normalcy,” he lectured. “It's not just President Trump that has been eroding norms of decency and he's had a lot of help from a lot of people on Capitol Hill. We'll see whether or not they want to come back to planet Earth and be good boys and girls and be decent and normal and adhere to facts and truth.”

CNN as a whole "deviated from normal broadcasting" in 2015, and Tapper deviated as enthusiastically as every other employee. The idea that he thinks he's set apart and "special" doesn't match the transcripts.