NPR Claims BLM Is NOT Marxist, When Founder Clearly Admits She Is!

To mark the anniversary of George Floyd's death on Tuesday, NPR's Morning Edition offered a 7-minute story by Chicago-based reporter Cheryl Corley on how Black Lives Matter has to combat "disinformation" on the internet. At least a conservative -- Mike Gonzalez of the Heritage Foundation -- appeared to accuse BLM of being the disinformers. But the rest of the piece claimed BLM opponents need to correct "errors" like people insisting the self-described Marxist group is Marxist. 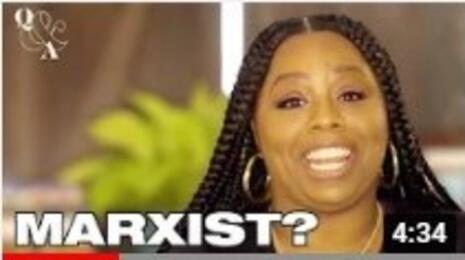 CORLEY: On her YouTube channel, Patrisse Khan-Cullors, one of the three co-founders of Black Lives Matter, responds.

PATRISSE KHAN-CULLORS: I need to set the record straight. Am I a Marxist?

CORLEY: Khan-Cullors says she does believe in Marxism but laughs at the online comments that say she's pushing a communist agenda. [!]

KHAN-CULLORS: I'm working on making sure that people don't suffer. I'm working to make sure people don't go hungry. And these comments that I've received have been incredibly hurtful. It means that so many people aren't really taking our work very seriously.

NPR accepts this spin: "I'm not pushing a communist agenda, I'm just making sure people don't go hungry." They edited around the actual words in the video "I do believe in Marxism." So it's not "baseless" to call her a Marxist.

CORLEY: Critics of Black Lives Matter say it's the movement's supporters that are getting duped.

MIKE GONZALEZ: I feel that Black Lives Matter is one of the greatest sources of disinformation.

CORLEY: Mike Gonzalez is a senior fellow with The Heritage Foundation. He's the author of an upcoming book about Black Lives Matter and Marxism.

GONZALEZ: They have good Americans, good Americans, well-intentioned Americans who do not want to see racial injustice, and rightly so, putting up signs on their lawn about Black Lives Matter. They have manipulated the good nature of many people who think what they're doing, in my view, is trying to promote a philosophy that is not going to be good for this country, will destroy this country and will destroy our way of life.

Not only does BLM run an anti-“disinformation” effort, Corley reports “Win Black/Pa’lante, a nonpartisan group created after the 2016 presidential election, also monitors disinformation aimed at people of color.” Um, “Win Black” sounds like a pretty political group, and it is – it’s a 501(c)(4) advocacy group. Its "Donate" page leads you to the leftist Democrat fundraising site ActBlue.

Corley also throws in the usual hilarious reference to “nonpartisan and independent fact-checkers” that Facebook uses: "Facebook says it's taken several steps, too, including working with non-partisan and independent fact-checkers to root out the spread of fake stories. Information proven to be false can be removed for violating social media standards."

In this seven-minute story, they never mentioned how the "independent fact-checkers" leaped (repeatedly) to dismiss the story that Cullors the Marxist went on a real-estate spending spree. (They claimed no one could prove she used BLM funds for the spree, not that the spree didn't happen.) Last month, NPR's race-matters "Code Switch" podcast just called the spree "very complicated."

NPR is funded by you, the American taxpayer.