On PBS, David Brooks Says Election Laws Won't Affect Much, But a 'Horrific Look' for the GOP

On Friday's week in review segment on the PBS NewsHour, pseudoconservative panelist and New York Times columnist David Brooks guessed the new election laws being passed won't do much to tamp down voting, that they're a "Potemkin set of laws," but they're a "horrific look" for Republicans, given America's history on civil rights.

Anchor Judy Woodruff had been lamenting Republican attempts to recount ballots in populous Maricopa County in Arizona, and he turned the lens to mocking Florida Gov. Ron DeSantis for doing a signing ceremony live on Fox News.

DAVID BROOKS: In a country with a lot of problems, the Republicans have picked the one area that's not broken to address all their energy on. And that's elections. And so they — all these laws, I doubt they will have a huge effect. I think studies show that they don't have a big effect on damping down turnout. But it's just a — given American history — Jonathan and I have talked about it before — it's just a horrific look.

And the amount of energy going into it, and the fact that Florida Governor DeSantis did it, announced is the signing of Florida's new election law on Fox, who does a news event on one network? (LAUGHTER)

I mean, this — it just shows we are in a land of theater. It's not about anything but the symbols of showing Donald Trump is right about the election and there was a lot of fraud. And it's a theatrical gesture, a Potemkin set of laws to just reinforce the Trump narrative. 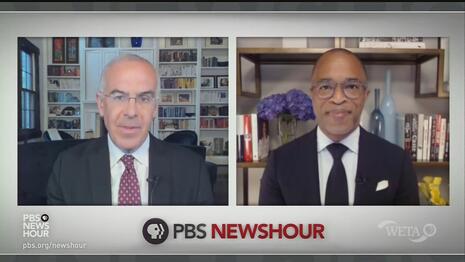 The joke about "who does a news event on one network" is a bizarre take. It's not exactly normal for governors to get a national news event across all the networks, short of a hurricane or a terrorist attack. But presidents do news events on one network. Take, for example, PBS hosting a gushy town hall for President Obama in South Bend, Indiana in 2016. NewsHour anchor Gwen Ifill asked why Obama wasn't more popular there: "What gives?"

Woodruff wasn't buying the argument that these new laws would have no effect. She turned to Washington Post columnist Jonathan Capehart to repeat the Democrat narrative that this is a conspiracy to keep Democrats from voting: "And, Jonathan, as both of you have said, these election laws have a very real effect on what happens going forward in the congressional elections next year, the midterm elections, and, of course, beyond.

Capehart said he earlier suggested "these election laws were a solution in search of a problem. And I cannot remember the person who sent me an e-mail, but they wrote me and said, listen, stop saying that because it's not true, because, from the Republican perspective, it is a solution in — to solve a problem. And the problem from the Republican perspective is too many Democrats voting...Democrats, who used to not vote by mail and not absentee vote, did it in droves in the safest election in American history, as we learned from the federal government. And so all of these laws are about stopping as many Democrats as possible from voting, as a means of increasing Republican power and increasing their chances of retaking the House."

The anti-Republican tilt of the PBS NewsHour is brought to you by....you, the taxpayers. Their underwriters include Consumer Cellular, Fidelity, Johnson & Johnson, and Raymond James.