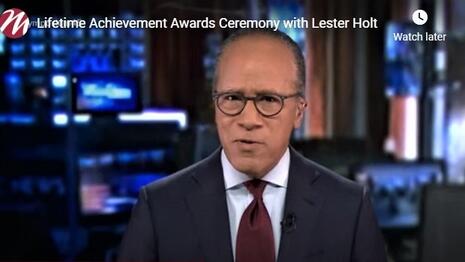 On the latest NB Podcast: Liberals complain constantly about their lack of control over "misinformation on the internet," not to mention those "dangerous" channels like Fox News, Newsmax, and OANN. They want more restrictive "content moderation" on social media. Media stars congratulated NBC anchor Lester Holt for  proclaiming in an award acceptance speech that "Fairness is overrated."

The "fact checking" site Snopes rushed to Holt's defense, but their self-image as guardians of truth is overrated.

This argument rests on the proposition that the media always know the truth. But they don’t, as his own network’s coverage of the bogus — and implausible — Russia collusion tale illustrates. Not to mention the media’s reporting of early Covid 19 advice that turned out wrong.

Obviously if one side says the White House is made of powdered milk, and the other disagrees, we can safely ignore the milk claim. But political disputes are rarely so cut and dried. So we report what both sides are saying and let viewers and readers make up their own minds.

Plus: CBS definitely thinks fairness is overrated for the Catholic Church. Priests and Vatican officials are portrayed as a pile of self-loathing homosexuals. and no defender of the Catholic Church appeared to rebut their gossip and smears. Maybe 80 percent of priests are gay! "Fifty shades of gay!" This isn't religion reporting, it's just wild speculating -- something they'd never to do to the Muslims or other religious minorities.