On Thursday, National Review posted a blog by Zachary Evans headlined “NBC’s Lester Holt Urges Journalists to Ditch Objectivity: ‘Fairness Is Overrated.'” This offended the "independent fact-checkers" at Snopes.com, who flagged the headline -- not the article -- as "False." Once again, they're complaining about a lack of context. They're arguing about spin. 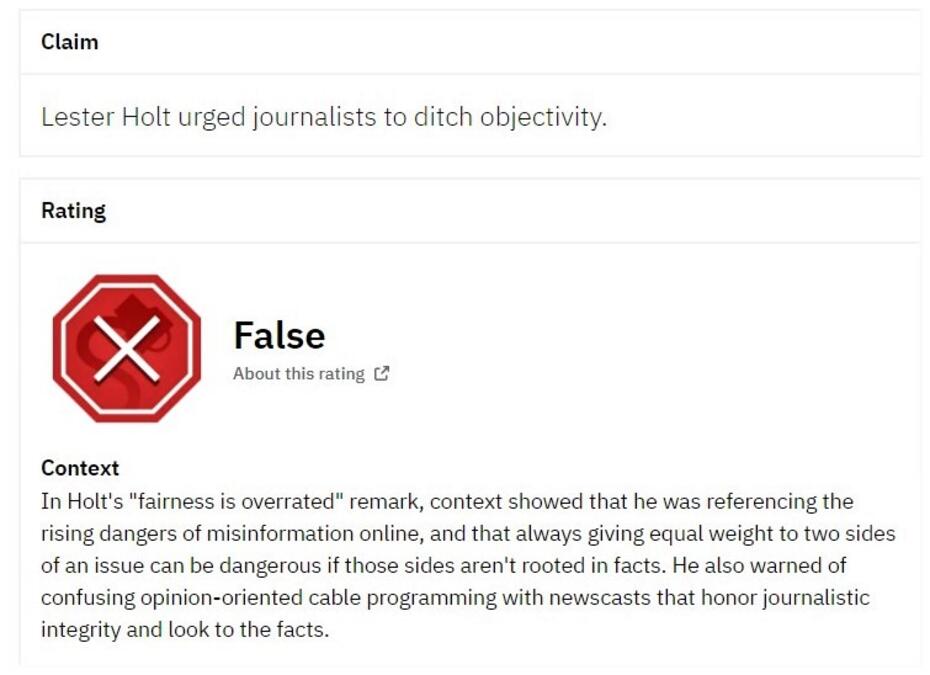 However, this was misleading. He did not “urge journalists to ditch objectivity.” Holt’s usage of the three words “fairness is overrated” came with quite a lot of context.

Snopes had nothing more to say about the Evans article, which includes plenty of the context of Holt's broader remarks. Picking on the headline is seriously overreaching, like NR readers only read the headlines?

The entire rest of the article is promoting Holt's speech and how sensible it was. But it's clear that the notion of objectivity -- that journalists shouldn't be partisans or take a side, that they should neutrally present both sides of a policy debate -- has clearly been cast aside during the Trump era, if not long before. Holt's little lecture came with the context of Trump denouncing the media as "enemies of the people."

Somehow, Holt can reject "The idea that we should always give two sides equal weight and merit" and that's not ditching objectivity. He can advocate the decision to "not give unsupported arguments equal time" as the definition of journalistic responsibility, and that's still objective.

"Fact checkers" should read Kyle Drennen's evidence about how Holt has abandoned objectivity on his program before they pronounce he's against "ditching objectivity." He insisted "holding those in power accountable is at the core of our function and responsibility," but didn't live up to that in interviews with Joe Biden, Hillary Clinton, Andrew Cuomo, and even the foreign minister of Iran -- an actual enemy of the people.

Just weeks ago, Holt failed to hold Biden's chief of staff accountable for lying about the vaccine rollout.

The spin is getting a little desperate when Holt attempts to claim that there's some tremendous gap between "opinion-oriented cable programming" and the "informed, knowledgeable analysis" of network newscasts, that are somehow not categorized as having an opinion.

Opinion-oriented cable programming, featuring provocative and often partisan voices, is popular, and it has its place. But it should not be confused with mainstream newscasts, which have their place too. Informed, knowledgeable analysis is not the same as opinion. I think all media could benefit from greater transparency as to who we are and what our chosen lanes are.

Many Americans can't see much of a difference in "lanes" between Holt's show and say, Brian Williams on MSNBC. If NBC had great reverence for the truth, why does Williams still have a show?