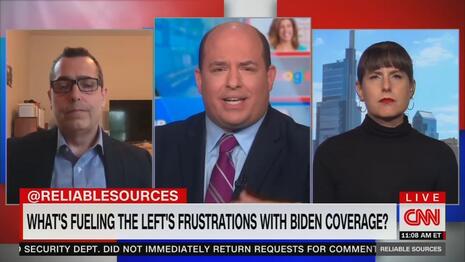 Stelter acknowledged the conservatives thought this first Biden presser was remarkably soft on the president, but “there is more and more criticism of media's priorities from progressives and from moderates. There’s a perception the Republicans are setting the narrative about the border, for example, and Biden is getting more questions about the border than the economy as a result.”

Oh, we get it. Focusing on the border, even from the left, is somehow bowing to the right. Stelter turned to two highly ideological writers, Greg Sargent of “The Plum Line” at the Washington Post and Amanda Marcotte of Salon.com.

Sargent claimed “the Republicans are setting the agenda on immigration. The press conference was a perfect example of that. The questions and there are nothing wrong asking questions about immigration. To be clear, they should be asking about that. But a number of the questions accepted the tacit right wing frame that a lot of migrants seeking asylum here is inherently a bad thing.”

Stelter lamented "the new Fox narrative is when will Biden go to the border," and "That is how right wing narratives trickling to the rest of the press and they divert attention." Fox is forever "diverting" from Biden's "historic" agenda. He asked Marcotte "what are the broader complaints from the left about coverage of Biden so far?"

Marcotte said "I think one of the biggest problems is what Greg said, which is that the right sets the agenda, they decide that there is a border crisis and they don't want to look into the reasons for it." Stelter briefly suggested that might be the Democrats' fault for passinve the massive "COVID relief bill" on a weekend. Marcotte then claimed "one of the reasons is Biden knows that if he has a press conference, it's going to be a bunch of questions that are basically from the right-wing agenda that are not about what the American people want."

Stelter threw the same softball to Sargent: "Greg, what are the left's frustrations with media coverage right now?"

Sargent said "I think one of the very big ones concerns the war on voting we're seeing across the country from Republicans. There is a huge wave of voter suppression underway in states, and almost uniformly the way the press covers this as a quote-unquote partisan battle, right? As if there's an equivalence on one side making it hard to vote wherever possible, based on zero public rationale of any kind, and based on the lie that the election was stolen from Trump and on the other side, trying to make it as easy to vote as possible. There isn't a midpoint between a fireman and an arsonist, as a clever person remarked on Twitter."

Then Stelter comically asked Marcotte: "Are they trying to be performatively tough on Biden in a bid to appear fair in the wake of Trump when, of course, Trump was such an abnormality, such a liar, that there's no equivalency between the two?"

Marcotte repeated: "The problem is mistaking coming at Biden with right-wing talking points often which are based on lies and misinformation as if that was being tough on Biden. I think there is a lot of things that people actually want to ask President Biden and it is not being asked because instead we're getting Fox News setting the agenda on immigration, and other subjects like that."

There will be no fact-checkers pouncing on this show as leftists spew counter-factual theories about the Biden press conference being drenched in "right-wing talking points" while there is a "war on voting" where Democrats are the firemen and Republicans are the arsonists.