Cotton said he offered a "very simple, very common sense message, grounded in American history in law, supported by a majority of Americans," that if the police are not allowed to restore order in the streets, "it is time to send in the troops" to stop rioting.

TOM COTTON: What happened next? Total meltdown with the little social justice warriors at The New York Times. All these children, they’ve been marinated in the language of the campus seminar room. They said things like, "Your words put my life at risk." As if typing on their phones, sitting on their futons was as dangerous as being a cop trying to stop rioters in the streets!

Or, "your words are violence." Nah, I’m sorry kiddo, words are words. Violence is what your friends are doing out on the streets of America. And of course the New York Times editors, they caved and rolled over, and they apologized. They said my work didn’t meet their standards. That’s one time I actually agree with the New York Times, my work did not meet their standards, it far exceeded their normally lousy standards.

...Some people on the left actually called on me to apologize. So let me say again, I will never apologize for defending America. 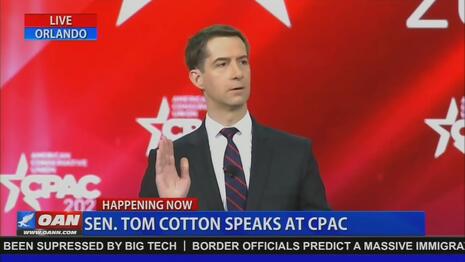 Sen. Cotton said he learned in the Army that you have nothing if you don't have security, and "security is what our brave police officers bring their communities every single day across America. And that's why conservatives should never apologize for backing the blue. And whether it's a child mob at The New York Times, or a social-media mob, or an actual mob in our streets, we will never bend the knee to a politically correct mob ever."

He added  "The New York Times is a laughingstock, obviously. But this is no laughing matter."