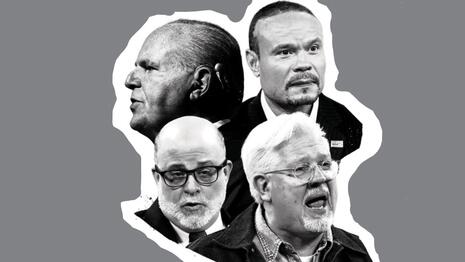 Liberal media outlets aren’t satisfied with merely seeking to disqualify Donald Trump from future influence over national affairs. They are seeking to judge and punish all of conservative media as responsible for the Capitol riot.

On the front page was an article against talk radio. Online, the headline was:

How Right-Wing Radio Stoked Anger Before the Capitol Siege

Shows hosted by Rush Limbaugh, Sean Hannity and other talk radio stars promoted debunked claims of a stolen election and urged listeners to “fight back.”

To older media watchers, it was quite comparable to how the Times and others tried to blame conservative talk radio for the Oklahoma City federal building bombing of 1995. A team of four reporters criticized the radio hosts as the splenetic "id" of conservative thought:

....the often unguarded nature of talk radio, where hosts indulge in edgier fare than on TV networks like Fox News and listeners call in to say what they really think, insulated from the scrutiny of people they disagree with.

The result is something of an id of American conservative thought. Hosts’ intemperate remarks on race, immigration and other subjects lend the shows a renegade feel and keep listeners loyal and emotionally invested.

The Times relied on a radio monitoring team at the Massachusetts Institute of Technology, which transcribed what was said on leading conservative programs between November 22 and January 5.

And yet, that had to admit "After the Capitol riot, the same hosts denounced the violence. 'Every good, decent honorable American would condemn all violence,' Mr. Hannity said on Jan. 6."

They also noted Limbaugh said on December 16 Biden “didn’t win this thing fair and square, and we are not going to be docile like we’ve been in the past, and go away and wait till the next election.” But there's a difference between feeling the election was unfair -- just as Democrats have done in 2000 and in 2016 -- and inciting a riot.