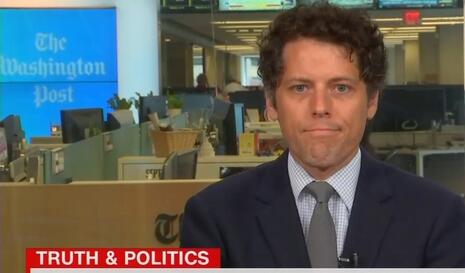 The Washington Post has undergone a jarring transition in its White House coverage, going from unremitting hostility toward President Trump to a warm hospitality for President Biden. Look no further than White House reporter Matt Viser, who seems to be signaling that Democracy now Thrives in Lightness.

Viser promoted a front-page story on Biden's normalcy with this gooey tweet on Thursday:

His tweets read like fortune cookies. He appears in front of cameras for 30 minutes a day, plotted and planned and little room for the unscripted or unusual. One week in, my look at Biden’s 9-to-5 presidency: "It’s just a guy getting up and doing his job.” https://t.co/U1otsZma7W

How...helpful. Viser is quoting Rep. Tim Ryan (D-Ohio) on how everything's so normal:

Biden’s first full week in office has showcased an almost jarring departure from his predecessor’s chaotic style, providing the first window into a tenure whose mission is not only to remake the White House in Biden’s image but also to return the presidency itself to what he sees as its rightful path.

The result so far is a 9-to-5 presidency — a tightly scripted burst of activity that was charted over the past few months, as Biden seeks to avoid heated conflict and stick to his plan of lowering the political temperature to a level that many Americans can tune out.

“I’ve heard from more people in the last couple of days how nice it is to turn on the TV and not have to figure out the latest drama of the day,” said Rep. Tim Ryan (D-Ohio). “It looks a lot like the George W. Bush White House — uneventful. It’s nice. . . . It’s just a guy getting up and doing his job.”

“Biden knows what it is to have a life,” said House Majority Whip James E. Clyburn (D-S.C.), a close ally. “We never got a break from Trump because he didn’t want anyone to have a break — because they might think of something other than him. He had to be constantly in your face, having a presence, didn’t want anybody with a headline but him. Biden doesn’t need that.”

The headline was "Biden embraces order and routine in his first week. How will that fit this moment of crisis?"

It's now a plus that Biden rarely appears before the press, often carefully scripted and not taking questions. (Reporters like that? They do when they voted for him. They also like "having a life" without overnight tweeting.) Biden the president is like Biden the candidate, hiding in the house with a Zoom call here or there:

He would hold several events a week, often carefully scripted with a teleprompter in place to encourage the famously meandering politician to stay on message. About once a week he would take a half-dozen questions from reporters. Rarely, if ever, did he attempt to become an omnipresent force.

Jill Biden often pitched her husband by promising that under a Biden administration, Americans would be able to read the newspaper without getting upset.

So how is that for a Washington Post goal? Keeping Americans happy and tuned out. Nowhere in this story was an anonymous "senior administration official" saying something disturbing about the president. Let's guess Viser won't be turning to that tactic very much. And we all can remember how lame the "half-dozen questions from reporters" were, often asking for an evaluation of how awful Trump was.

PS: Guess who loves this front-page game of patty-cake? Dan Rather, who Viser happily retweeted with copy from his story:

“With unity, we can do great things” read one

“I know times are tough, but help is on the way” read another