Nicolle Wallace Admits: We Were Seriously Out of Touch With Voters on COVID!

There was a brief moment on MSNBC's Deadline White House on Thursday where they acknowledged Joe Biden just couldn't win some Trump voters on the coronavirus, and they were out of touch with lower- and middle-class voters. Nicolle Wallace said to New York Times reporter Nicholas Confessore "It would seem, Nick, that the disinformation and this effort to make it a false choice between opening up and having the pandemic rage and closing as a way to cure it seeped into enough of Trump's voters."

NICK CONFESSORE: After every election a person in my shoes has to step back and think about what we were missing and what went wrong in the analysis to have some of our assumptions kind of upended, and I think one that's important here is that the president's messaging on this was more potent than some people, including me, thought it was. I think the appeal of a return to normalcy was high for a lot of people. People missed their jobs, their workplaces, their friends, their grandparents, their family and so if the president is out there every day downplaying the enormity of the pandemic and saying it is fine, and hope is near on a cure and Democrats and the media are exacerbating it for political purposes, it is easy to see that would be fertile territory, now looking back, for a certain number of voters. I think we'll find out in the coming weeks and months as we have some more data to look at, that and we'll have a sense of really how that cut into Biden's advantage on this issue in terms of his handling of this crisis.

Wallace echoed that thought, although she described it as anti-public health: 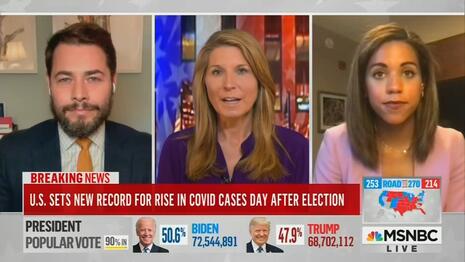 NICOLLE WALLACE: I am so glad you opened this door, because I'm just gonna dish here. I said on Tuesday night around 4 in the morning to Brian Williams that I think we completely missed the maybe hidden anti-taking care of public health vote, or the sort of pro-get back out there vote or whatever you want to call it. I think that people want to be told that we could do both.

People worry about their kids, my little boy is at home. I worry about him every day. I'm doing my best to get my son through math and reading but I'm no replacement for a teacher and friends. People feel despondent about being separated from their family and friends. from their peer groups and their work colleagues. And there is an austerity and there is an elitism so say we could recreate that bubble in our homes an that is not reality for a lot of people.

And to your point, if things sort of stay on the trajectory that again Trump and Biden seem to expect that he will, that Joe Biden will get to 270 first, how does that figure into -- and I have say for Biden's part, he always makes an effort to talk about the economy, he never separates them, but it is clear from the data that has not been heard by the Trump voter.

Alexi McCammond of Axios also cited Trump voters who wanted a more open economy, but she suggested they were under-informed: "They can only point to the economy pre-COVID, but the economy post-COVID will be forever different. It will be decades before we get to the pre-COVID economy and I think Donald Trump has done well, not really allowing those folks who are still sticking with him to even understand the reality."