Steele Dossier Smackdown: RNC Flack Knocks Amanpour On Her Back

When I think of CNN/PBS talk show host Christiane Amanpour at election time, I recall her appearance on The Tonight Show with Jay Leno in December 2008, where she described Barack Obama’s election as remarkably ecstatic: "I don't think there's ever been such a reaction for a political event, such a happy reaction, people spilling onto the streets, you know, dancing, singing, high-fiving with the police."

So we can guess who she’s voting for again this time. (Voting for Obama was her first American vote.)

On Wednesday, RNC spokesman Liz Harrington tweeted out video from her energetic jousting with the imperious anchor as she dismissed every fraction of Biden scandal as preposterous piffle below the caliber of Fox News. 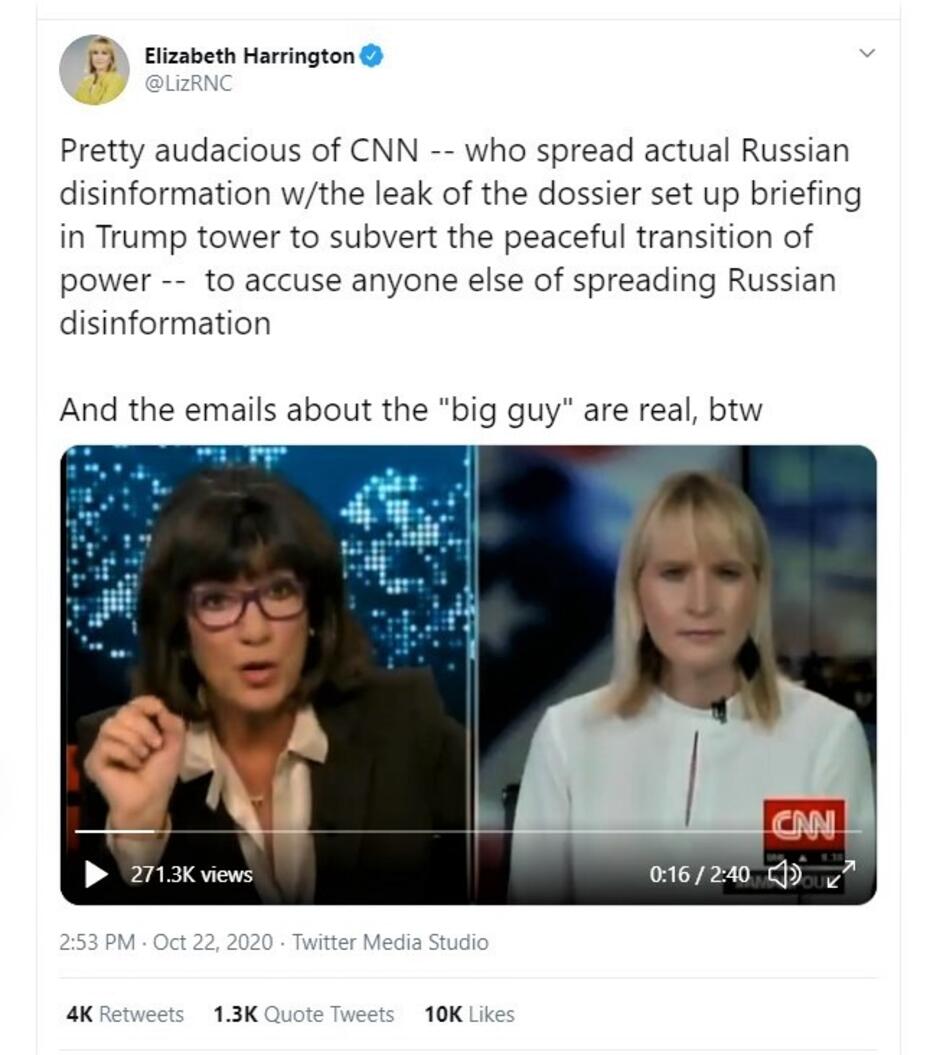 Harrington argued “Joe Biden, by his own admission, has never had a real job in his life. He said he's never cashed a paycheck. He's only ever been in the swamp. He's used his public office for personal gain. That is corruption.”

Amanpour disparaged her as liberals do: “Liz, you actually sound like you're on a Fox News show right now.” Translation: you're spreading crazy conservative conspiracies. Then she added:

HARRINGTON: -- Fox News is the only news channel that's covering the real e-mails.

AMANPOUR: Even Fox News would not touch this story that President Trump's --

AMANPOUR: -- personal lawyer, Rudy Giuliani, tried to dump. You know that. Even the New York Post, the key reporter --

Then came Harrington's delicious smackdown of CNN for pretending they never put out Russian disinformation...when it's become clear that the Steele Dossier was full of it.

AMANPOUR: Are you comfortable with the president of the United States being close to a person like Rudy Giuliani who also says also that he is not bothered whether any of the information comes from Russian hacking? What does that say?

HARRINGTON: Are you comfortable that CNN used Russian disinformation from a Russian asset to leak it to subvert the peaceful transfer of power? That reporting on the dossier was complete --

HARRINGTON: -- complete verified Russian disinformation? Is it not? Is it not?

AMANPOUR: Liz, let's just get back to the story.

AMANPOUR: Can we get back to the current story?

HARRINGTON: -- because everything the Democrats accused us of doing is what they themselves did.

This is where Amanpour really sounded arrogant:

AMANPOUR: As you know perfectly well, I'm a journalist and a reporter and I follow the facts. And there has never been any issues in terms of [Biden] corruption. Now, let me ask you this. Yesterday, the FBI --

HARRINGTON: How do you know that?

AMANPOUR: Now, we're not going to do your work for you. I want to ask you a question --

HARRINGTON: It's a journalist's job to find out if this is verified!

Isn't this a discouraging sign for where we would be headed with the media, enthralled with visions of President Biden? Investigate the Democrat president? "We're not going to do your work for you."

On PBS, Amanpour & Co. is brought to you by the Anderson Family Fund.

PS: Liz Harrington was an intern eight years ago for CNSNews.com, a division of the Media Research Center.