On Friday, June 26, ABC's Good Morning America and World News Tonight boasted an "exclusive" report of an alleged "hate crime" in downtown Madison, Wisconsin. A biracial teenage girl claimed to have been doused with gasoline though her car window and set on fire. Althea Bernstein’s case drew more attention after she received a phone call from Meghan Markle. Rep. Joe Kennedy spoke about it on the House floor. Rep. Ilhan Omar tweeted "these injustices must end."

Now it turns out police can't find any evidence to corroborate the charges here. Will ABC catch up on this? Notice how this Alex Perez report doesn't include the word "alleged." Why do they always rush to believe the worst?

ALEX PEREZ: 18-year-old Althea Bernstein says she was on her way to her brother's house around 1:00 AM Wednesday morning. She says she was stopped at a red light and listening to music when she heard someone yell the N-word. According to the police report her driver side window was down and she heard someone yell out a racial epithet. She looked and saw four men all white. She says one used a spray bottle to deploy a liquid on her face and neck and then threw a flaming lighter at her causing the liquid to ignite. She drove forward and patted out the flames.

ALTHEA BERNSTEIN: I don't even like remember anything, but your brain still has that fight or flight response that takes care of you so I made it home. I called my mom. I went to the, I drove myself to the ER.

ALEX PEREZ: Now an active and ongoing investigation, Madison's Mayor saying while we are still learning more about the details, current information suggests this may have been a premeditated crime targeted toward people of color, which makes the incident even more disturbing.

ALTHEA BERNSTEIN: It's definitely a learning opportunity and I'm very, very hopeful that these men sort of see all the responses and that they know that they hurt me. And that this is something that is going to affect me for a while, and I really hope that they choose to improve themselves.

ALEX PEREZ: And authorities say they are reviewing surveillance images from nearby cameras hoping for any clues that might help them track down the attackers. Cecilia?

John Sexton at Hot Air smells "another Smollett hoax," and reports the local Wisconsin State Journal rolled out the ugly lack of corroboration about so-called "attackers": 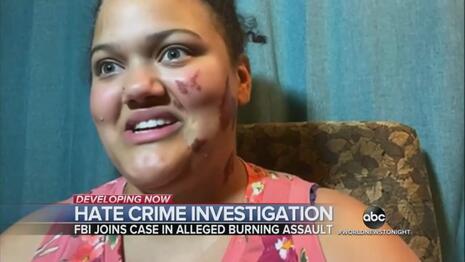 An exhaustive search of video from city- and privately owned surveillance cameras, however, turned up no evidence of the attack, and the investigation identified a number inconsistencies in Bernstein’s story…

A review of 17 city cameras in the Downtown area from 12:15 a.m. to 1:15 a.m. found no groups of white males matching Bernstein’s descriptions.

Police also did not find any fire damage in the [Hyundai] Elantra, according to police reports, and a dog trained to sniff out accelerants did not find evidence of them of in the car.

A forensic analysis of the shirt she reported wearing at the time of the attack did turn up evidence of a “medium petroleum distillate,” such as charcoal lighter, some paint thinners or an organic solvent, according to the police investigation. But no such evidence was found on the shorts she was reportedly wearing at the time, nor on swabs taken of the vehicle.

The police investigation also found evidence that Bernstein had her window rolled up at the time of the alleged attack and hadn’t stopped at stoplights where it might have occurred. It also determined she had been driving in a different lane than she told police and was uncertain about where exactly the incident occurred.

File this away for when ABC reporters snarkily claim the Republicans are making charges "without evidence."

Sexton says it's obvious the cops and the FBI don't believe this attack ever happened, but there are no plans to charge Bernstein with filing a false report. Her family is now refusing to talk to the media, putting out this statement:

“Althea Bernstein and her family appreciate the detailed investigative efforts by all involved in this case. Althea’s injuries are healing and the support of our community has been invaluable in that regard. We continue to maintain our family privacy and will not be granting interviews at this time.”