ABC's Karl: Indoor Trump Rally Is Like ‘Taking Your Family With You to Fallujah’ 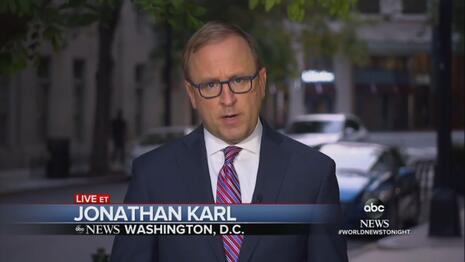 Many of us would not be comfortable with the risk of attending a large indoor event of any kind during the pandemic. But some Trump fans have been really excited to attend a rally with the president. When the Trump campaign moved a rally indoors in Las Vegas this weekend, reporters largely refused to attend, leaving the job to the White House press pool.

In a report from George Condon in National Journal, ABC White House reporter Jon Karl took his corona-panic to an extreme metaphor, one of the deadliest battles of the Iraq war:

Karl, who has worked in war zones, said the contagious nature of the pandemic makes it different from shooting wars. “This is not like embedding with the Marines in Fallujah,” he said. “It is like you are taking your family with you to Fallujah.”

If reporters can't tell the difference between an infectious virus and a shooting war, are they really the kind of journalists people can count on? It's understandable if most reporters decide not to report inside this particular fishbowl, but Karl's loathing of the president is coming through loud and clear.

Trump campaign spokesman Tim Murtaugh issued the rebuttal to Karl's viewpoint in the article: “If you can join tens of thousands of people protesting in the streets, gamble in a casino, or burn down small businesses in riots, you can gather peacefully under the First Amendment to hear from the president of the United States."

Zeke Miller of the Associated Press, who succeed Karl as president of the White House Correspondents Association, praised “the professionalism of the White House travel pool in a difficult and potentially hazardous situation Sunday evening,” pledging to keep pushing the White House “for necessary health and safety precautions.”

CNN veteran Charles Bierbauer, who covered the White House from Ronald Reagan through George H.W. Bush, serving as president of the WHCA from 1991 to 1992, added “It’s hard to come up with a precedent for what happened in Las Vegas because we’ve never had a pandemic like this before and we never had a president who was totally inconsiderate before,” he said. “The media are in a position where they are kind of torn."

Karl told Condon he was happy when the White House press office shrank the number of reporters in the briefing so there could be social distancing, but said the president hated it, and especially disliked the exile of One America News reporters from the briefing room. Some Trump-loathing reporters simply stopped coming to the briefing for health concerns.

“They just don’t care,” said April Ryan, White House correspondent for American Urban Radio Networks. “It bothers me not to be there. I’ve even found myself shouting at the TV a question I wished were being asked. But we have families who depend on us. We are not immune.”