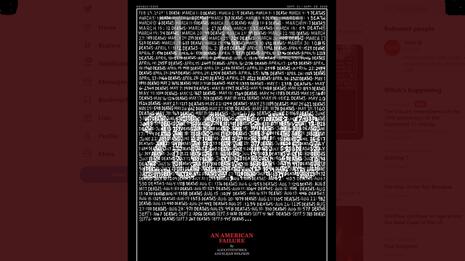 TIME magazine used to be a summary of the week's news, but the era of the weekly news magazine has clearly ended. Anyone picking up this magazine now would have a hard time distinguishing it from a liberal opinion journal like The New Republic. It doesn't report, it lectures and crusades. Right now, it's exploiting 9/11 to lecture and crusade about America's ineptitude about the coronavirus. It's not really condemning the whole country, or both parties, but that's the pretense. It's the usual reckless Trump loathing disguised behind a responsible mask.

TIME editor-in-chief Edward Felsenthal explained why the magazine changed its trademark red frame on the cover to black, like it did right after 9/11. It's a "wake-up call" to science:

And then there is the U.S., which will soon cross a devastating marker: 200,000 deaths caused by COVID-19. That death toll–equivalent to U.S. deaths in more than three Vietnams, or the entire population of Salt Lake City–is the world’s largest by far and more deaths per capita than in all but 12 other countries.

The cover story by Alex Fitzpatrick and Elijah Woolfson came with the hectoring headline "COVID-19 Has Killed Nearly 200,000 Americans. How Many More Lives Will Be Lost Before the U.S. Gets It Right?

Although America’s problems were widespread, they start at the top. A complete catalog of President Donald Trump’s failures to address the pandemic will be fodder for history books. There were weeks wasted early on stubbornly clinging to a fantastical belief that the virus would simply “disappear”; testing and contact tracing programs were inadequate; states were encouraged to reopen ahead of his own Administration’s guidelines; and statistics were repeatedly cherry-picked to make the U.S. situation look far better than it was, while undermining scientists who said otherwise. “I wanted to always play it down,” Trump told the journalist Bob Woodward on March 19 in a newly revealed conversation. “I still like playing it down, because I don’t want to create a panic.”

....Trump did not wear a mask in public until July 11, more than three months after the CDC recommended facial coverings, transforming what ought to have been a scientific issue into a partisan one. A Pew Research Center survey published on June 25 found that 63% of Democrats and Democratic-leaning independents said masks should always be worn in public, compared with 29% of Republicans and Republican-leaning independents.

They did make space for a socialist critique of America's health-care system as inferior to Estonia's:

We’re also struggling because of the U.S. health care system. The country spends nearly 17% of annual GDP on health care—far more than any other nation in the Organisation for Economic Co-operation and Development. Yet it has one of the lowest life expectancies, at 78.6 years, comparable to those in countries like Estonia and Turkey, which spend only 6.4% and 4.2% of their GDP on health care, respectively.

Oh, and the coronavirus proves again America is deeply racist. The virus isn't racist, but we have an "epidemic" of police violence:

COVID-19, like any virus, is mindless; it doesn’t discriminate based on the color of a person’s skin or the figure in their checking account. But precisely because it attacks blindly, the virus has given further evidence for the truth that was made clear this summer in response to another of the country’s epidemics, racially motivated police violence: the U.S. has not adequately addressed its legacy of racism.

And Americans suffer because too many people watch Fox News:

Republicans and Democrats today don’t just disagree on issues; they disagree on the basic truths that structure their respective realities. Half the country gets its news from places that parrot whatever the Administration says, true or not; half does not. This politicization manifests in myriad ways, but the most vital is this: in early June (at which point more than 100,000 Americans had already died of COVID-19), fewer than half of Republican voters polled said the outbreak was a major threat to the health of the U.S. population as a whole.

In other words, there is the "basic truths" of liberal outlets, and then the Fake News that is Fox. Watch Fox, and you're endangering your life, and the lives of others. That's your weekly lecture.