The last two weeks of convention coverage on PBS underline for Republicans why Secretary of State Mike Pompeo turned sassy on PBS anchor Judy Woodruff last fall when she shilled for Joe Biden on Ukrainegate:

JUDY WOODRUFF: Well, just finally, you know that there's been no proof of any misdoing on the part of Vice President Biden.

MIKE POMPEO: You all keep repeating that line, as if you're working for the DNC.

WOODRUFF: I'm definitely not working for the DNC. I'm an independent journalist.

Woodruff later bludgeoned Vice President Mike Pence with how many coronavirus deaths the administration feels responsible for causing. This is nothing like the softness Woodruff has offered Hillary Clinton. Or Joe Biden. Or Adam Schiff.

On Thursday night, the target was White House chief of staff Mark Meadows, who handled the hardballs with a calm spirit. Judy "I'm not working for the DNC" Woodruff complained that the Republicans are mercilessly exaggerating Biden as some sort of socialist....as if liberal journalists and their favorite Democratic pols don't exaggerate Donald Trump into a lunatic extremist and racist who's a danger to democracy.

JUDY WOODRUFF: We're hearing a lot of the personal testimonies and a lot about Joe Biden. I want to ask you about that. He's clearly a progressive, he’s a liberal. His views are to the left of the president's. He's for expanding the Affordable Care Act and he is for diverting some police funding to social services. But he's not for a government-run "Medicare for All." And as we just heard in Lisa Desjardins’ report, he's not nor defunding the police. He’s repeated it again. And yet Speaker after speaker at the convention is saying that he is for these things. They’re saying he's a socialist and he’s going to bring the country to ruin. Why not say this is what he believes and not exaggerate?

Meadows said it wasn't exaggerating, that Biden said he would divert funding away from law enforcement. If Biden wins and Democrats win both houses of Congress, Biden will negotiating with leftists in both houses who are dead-serious about defunding (even abolishing) police, as well as prisons and ICE immigration enforcement. But liberal journalists feel compelled to undercut those arguments.

That first question is almost as long in word count as all the questions that Woodruff offered in a similar interview at the same time frame (late in the 8 pm Eastern hour) on the previous Thursday at the Democrat convention.

The guest was Biden deputy campaign manager Kate Bedingfield -- known for writing nasty-grams to the press for somehow helping Trump spread "misinformation" on Biden. These were the brief and easy questions pampered Miss Kate received:

WOODRUFF: Tonight what will we learn from Joe Biden?

What do you say, Kate Bedingfield, to Bernie Sanders and others who say they wish there had been more progressive voices front and center at this convention?

As of today, five of President Trump's closest associates have been indicted. Paul Manafort, Michael Flynn, Roger Stone, Michael Cohen and Steve Bannon. Voters, we know, seem to care a lot more about healthcare, about this pandemic, about jobs. So how much is Joe Biden going to be talking about this part of Donald Trump’s legacy in this campaign?

Judy's other long hardball questions to Meadows are below. [Hit Expand]. 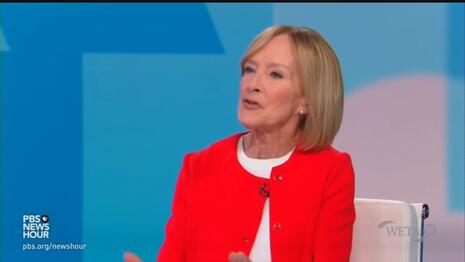 WOODRUFF: Let me ask you something quickly that Vice President Pence and others have said. That the president has saved lives with a total ban on travel from China starting back in January. Claiming -- he claims, others claim that Joe Biden, the Democrats attacked this. However, we’ve looked back at all this. It was not a total ban. The New York Times estimates something like 40,000 travelers from China arrived in the U.S. After the president imposed that action over the course of two months. And that Joe Biden and the Democrats did not attack this. We've gone back and looked. So where is all of that coming from?

MEADOWS: Well, if you went back and looked, they did condemn it. So let's go ahead and do that. He did call him xenophobic.

WOODRUFF: But he wasn't referring to the ban when he said that.

So many things to ask you about, Mark Meadows. One is certainly the racial unrest in the country right now. The vice president painted a picture last night of many cities overrun with violence. There has been violence, but we know there have also been a lot of peaceful protests as well. My question to you is, do you understand the anguish, the anger and the anguish of black families over the repeated instances of black men shot just like, you know, Mr. Jacobs [sic] this week in Kenosha?

You had several White House officials today criticizing, for example, professional athletes that have been sitting out some games over the last day. Some are continuing tonight. Some are not. Just a few minutes ago, Mark Meadows, we heard the coach of the [Los Angeles] Clippers, Doc Rivers say, and I’m quoting him, "we keep loving this country, and this country does not love us back." Are you prepared also to criticize these athletes for what they're doing?

The reason I'm asking you about your view of these athletes is because the president in the past has called them quote, "nasty and dumb" for sitting out these games. But I also want to ask you about mask wearing, Mark Meadows.  You were out traveling in the country. You were in your former congressional district in western North Carolina this week, we have some video of that. You were not wearing a mask. We see 1,500 seats on the South Lawn of the White House tonight for the president's address. No mask mandate. The CDC has strongly suggested people wear a mask. How do you square the two?

But you're not concerned about the message it sends when people see not just you but again 1,500 seats close together on the White House lawn?

All this underlines why Donald Trump has never granted an interview to PBS since becoming a presidential candidate. He knows how dramatic their double standard is.

All inquiries, complaints and feedback about the tilt on your taxpayer-funded network can be sent to viewermail@newshour.org. Or their snail-mail address: