On Bork, Totenberg gushed “I have to say, having watched the Senate Judiciary Committee over the years, this is the one time where senators who were on offense actually were prepared. They asked good questions. They knew a lot about Bork. And Joe Biden led the charge.”

But then came the Thomas nomination in 1991.

BIDEN: Tell the whole truth and nothing but the truth, so help you God?

ANITA HILL: I do.

DESJARDINS: Other women came forward to testify but Biden agreed with Republicans to limit the testimony to Hill alone. The televised  hearings gripped the nation.

HILL: His conversations were very vivid. He spoke about acts that he had seen in pornographic films involving such matters as women having sex with animals, and films showing group sex or rape scenes.

This, almost 30 years later, is still an unfounded smear. PBS didn't air any footage of Thomas passionately denying Hill's account. They didn't care about who was telling the truth then, and they still don't. It was just about winning. They didn't note tens of other female co-workers of Thomas who spoke and even testified before the Senate in his defense. PBS stuck to the one-sided feminist bubble:

DESJARDINS: It all would make a searing impression on some women watching, like Aimee Allisson, the founder of the pro-women group She the People.

AIMEE ALLISON: I was an undergraduate and I went to the common room in our dorm to watch the hearings. I saw the way she was being treated by the white men on the Judiciary Committee, both Democrats and Republicans. Joe Biden was among them.

DESJARDINS: Biden stressed he would run a fair hearing.

BIDEN: I have not made my judgment based on this proceeding, because we have not heard all the evidence.

DESJARDINS: But his handling of it and the fact that other corroborating witnesses were never called, has raised sharp scrutiny. 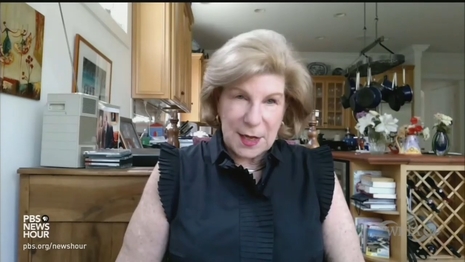 BIDEN: This entire proceeding has ended.

PBS never quite explained that taxpayer-subsidized Totenberg was one of the very cooperative vessels for liberal Democrats seeking to destroy the nomination with Hill's never-substantiated charges, just as Totenberg successfully ruined the nomination of Douglas Ginsburg to the Supreme Court in 1987 (over smoking some marijuana) after Bork's nomination failed. This led to swing-vote justice Anthony Kennedy.

On PBS, Biden is being criticized.... from the hard left.