Rush Limbaugh has been saying for weeks that Joe Biden would skip the presidential debates in the fall. Now former Clinton press secretary Joe Lockhart has taken to CNN.com to argue Biden should skip it, in an article headlined "Joe Biden could still lose this election." On Saturday, Michael Smerconish put him on TV to make the case, and quoted from it: "Whatever you do, don't debate Trump. Trump has now made more than 20,000 misleading or false statements according to the Washington Post. It's a fool's errand to enter the ring with someone who can't follow the rules or the truth."

It never occurred to Smerconish to ask Lockhart that if it sounds undemocratic for Trump to talk of moving the election, doesn't it sound undemocratic for Democrats to talk about skipping the tradition of presidential debates? This is CNN, the network that gave about 27 Democratic candidates hours and hours of "town hall meetings" with fellow Democrats, but somehow they can't advocate for a two-sided debate.

Instead, Smerconish just suggested Trump would make hay out of it.

MICHAEL SMERCONISH: Joe, if the president is watching this right now, I could see him rubbing his hands together and saying, oh, my God. That would be perfect because then I, of course, get to say he's afraid to get on the stage with me. It has to do with his cognitive abilities.

JOE LOCKHART: Yes. Well, he will say that. And I think as I wrote in the article it's worth the risk. This is a president who as I said in the article is incapable of telling the truth. He spins these conspiracy theories out there. And up until now most of those theories are broadcast by FOX News and, you know, on his Twitter feed. You know, most Americans don't see that.

The debates are very different. This is the one thing, now that we're not really going to have conventions where the public will tune in, you know, 50, 60 million people. And they will -- they will see all of this nonsense from him. He will take the truth and destroy it. And Biden will be in the position of correcting him over and over and over again. I don't think he should give him that platform.

Smerconish asked Lockhart several times if the Democrats had contacted him about this, and he swerved around an answer. 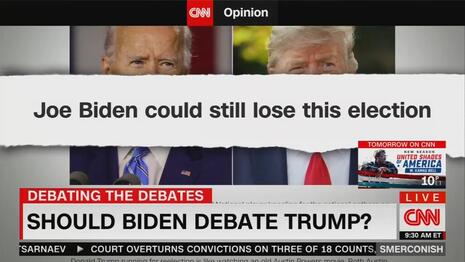 Lockhart just repeated himself: "And we saw in the debates in 2016, Hillary Clinton showed a mastery of the issues. I think she on every point was more honest and bested Trump. But Trump came out of the debates, I think, doing better because he just kept repeating the same old lies. We're going to build a wall and Mexico is going to pay for it. We're going to keep all of those Mexican rapists out of the country. We're going to make great trade deals. None of these things have come to pass. And giving him that sort of national forum to continue to spout, you know, get to 21,000 or 22,000 lies, I think just isn't worth it for the Democrats or for Biden."

So The Washington Post should be happy that their partisan record of trashing Trump with "fact checks" is now being used to kill off presidential debates. Democracy dies in darkness, indeed.