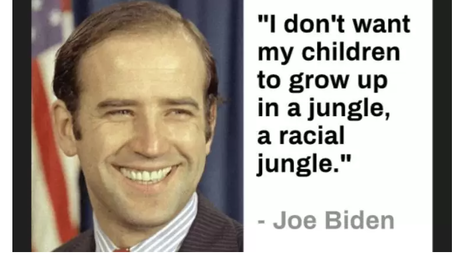 If Joe Biden used the words "racial jungle," speaking in fear for his school-age kids in a school-busing debate in the Seventies, wouldn't that sound disgusting to liberals? Yes.

So it's tremendously awkward for PolitiFact to throw a "Half True" flag at a pro-Trump website that re-ran tweets from The New York Times and the hard-left Center for Media and Democracy.

PolitiFact chose to spotlight a "Viral Image" on Facebook, and that image carried a quote that wasn't quite right. But it certainly captured Biden's sentiment. It might suggest that PolitiFact is trying to shame pro-Trump people from sharing Biden's old record too energetically.

The Facebook post had a graphic says that in 1977, Biden said "I don't want my children to grow up in a jungle, a racial jungle."

The quote isn't accurate. But the actual article at TeamTrumpUSA.com is more journalistically accurate:

As PolitiFact's Ciara O'Rourke tried to explain in her June 29 item, it wasn't false, but was flagged in a false-news effort:

The post was flagged as part of Facebook’s efforts to combat false news and misinformation on its News Feed....

First, he wasn’t speaking broadly about integrating Black and white Americans. He was talking about busing to integrate public schools.

But public-school busing was a major race-relations issue. And he was on the "wrong" side for the Left. Just looking at the top of this page, you can sense a little desperation in trying to improve the "context" of the quote. 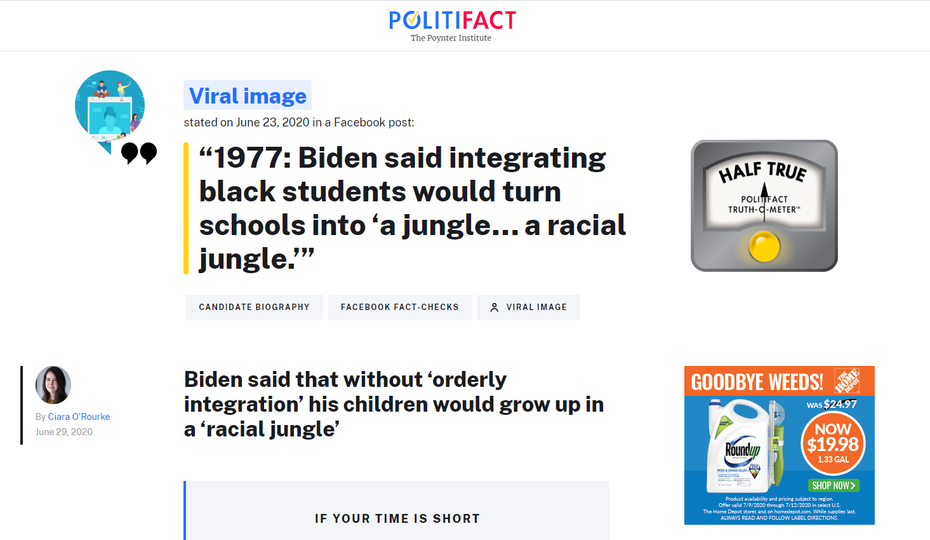 In politics, this is close enough in verbiage to qualify as an embarrassing jungle bungle for a Democratic campaign in modern terms. This "fact check" concluded:

The Facebook post says that in 1977, Biden said integrating black students would turn schools into ‘a jungle… a racial jungle.’"

That’s not quite right. In 1977, Biden, who opposed court-ordered busing to integrate public schools, said: "Unless we do something about this, my children are going to grow up in a jungle, the jungle being a racial jungle with tensions built so high that it is going to explode at some point."

He advocated for "orderly integration," specifically integrating housing, and he supported many other aspects of desegregation and civil rights. But, as the New York Times reported, Biden also pushed an "anti-busing agenda into the early 1980s." 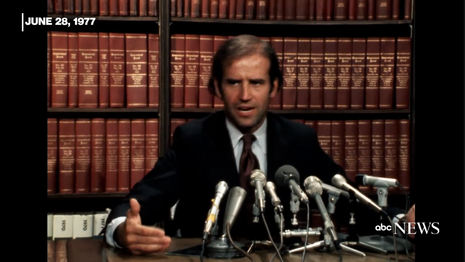 It seems like "Half True" in this case is a rating for "true, but we don't like the way it SOUNDS. The context could be damaging for Biden." If it weren't being shared by "Team Trump USA," they would rather not discuss it.

It's interesting that they went spelunking around Facebook for a "Viral Image" and then confessed this was "Half True." As you can see, as of today, there are 421 "Viral Image" fact checks in the PolitiFact archive, and fully 396 of them (94 percent) are "Mostly False" or worse.