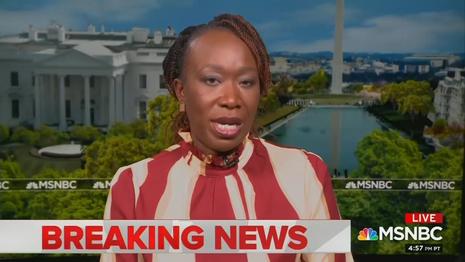 Joe Flint at The Wall Street Journal broke the story that “MSNBC is expected to tap political analyst Joy Reid to anchor a 7 p.m. daily news and opinion program, people familiar with the matter said, filling the vacancy created at the cable news channel when Chris Matthews resigned abruptly in March.”

Matthews resigned over laments he said insensitive things to women, and the MSNBC weekday lineup is presently devoid of Hosts of Color from noon to midnight. MSNBC can hardly insist Biden needs to name a black woman as his vice-presidential pick if they can’t put a black woman in their evening schedule.

A start date and a show name are yet to be determined, but she would vacate her weekend AM Joy slot. PM Joy might not have the same ring. Reid and Steve Kornacki have been filling in as hosts in the old Hardball slot. Reid last hosted on the weekdays on the afternoon show The Reid Report from February 2014 to February 2015.

Flint let Reid maintain that she was hacked on Twitter:

In 2018, Ms. Reid came under fire for personal blog posts from the mid- to late-2000s that expressed antigay views. She questioned the authenticity of the posts after critics surfaced them, saying “I genuinely do not believe I wrote those hateful things.”

However, she did acknowledge inappropriate and hurtful tweets that had angered the LGBT community and apologized, saying her views have evolved over the years.

In 2017, Reid couldn't be a decent human being when House Majority Whip Steve Scalise was shot by a big Rachel Maddow fan. "Obviously it’s a delicate thing, because everybody is wishing the Congressman well and hoping that he recovers. But Steve Scalise has a history..." She wasn't really part of the "everybody" expressing concern for Scalise.

Just a month ago, Reid was engaging in conspiracy theories that Team Trump wanted farmworkers to get sick from the coronavirus. She said "I said when Donald Trump first got elected that what all of Americans have to learn to do is use your lurid imagination, because there’s almost nothing that they wouldn’t do."