Professors are often the first to try and deny the problem of media bias. Take the website The Conversation, with its motto "Academic rigor, journalistic flair." This recent article is lacking both of those: "Claims of ideological bias among the media may be overblown." Let's flip all the way to the bottom: 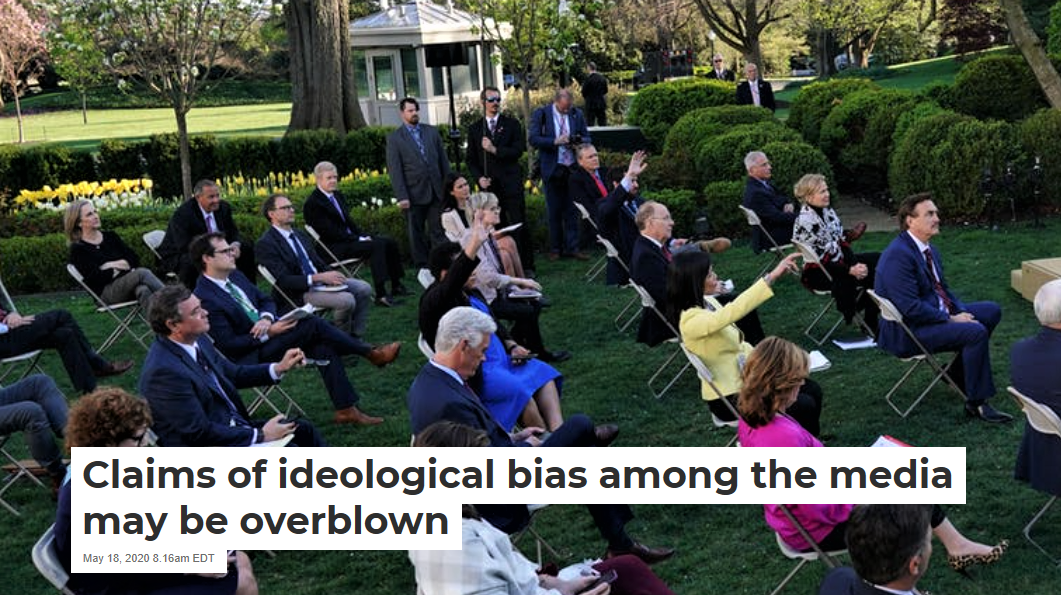 Our research also shows that there is no bias regarding which candidates newspapers cover. Additionally, there are only small shifts in the tone of coverage of one of the most polarizing news topics – Trump. Most newspaper coverage is moderate and exhibits few easily identifiable biases.

Contrary to President Trump’s claims, we find little blatant news bias in what the media covers and how it covers it. While the nature of politics encourages politicians to undermine negative coverage through claims of bias, our research suggests that ideological bias in U.S. newspapers is largely nonexistent.

This was written by four professors -- from Florida State, the University of Virginia, Miami (Ohio), and Brigham Young. Here's the easiest guess when Experts deny media bias in the content of media outlets: They don't actually read or watch the content. Instead, this quartet of deniers tried these research tactics, among others:

1. They found the names of 13,000 journalists on Facebook and asked them to state their opinion on the bias of their own employer. They then classified newspapers on an ideological spectrum based on those opinions. No content analysis.

2. They put newspaper stories into some kind of computer software, judging for emotional terminology, for an unbelievable 697 newspapers during President Trump's first 100 days in office, so actual humans would never try that large a project without a cyber-"solution." The sample size is ridiculous.

To see whether newspaper ideology affected the tone of coverage, we downloaded every story available about President Trump during his first 100 days in office. To measure tone, we used Linguistic Inquiry and Word Count. This software estimates the emotional tone in written language on a scale from 0 to 100. If a story has a neutral tone, the software will score it a 50.

While there is a relationship between a newspaper’s ideology and the tone of coverage, the effect is small. We considered the average tone of three papers, one on the far right of our scale, one in the center, and one on the far left. For all three the tone is close to 50. Conservative newspapers are not overt Trump cheerleaders, and liberal outlets are not overly negative.

Is it plausible that the most "far right" and "far left" newspapers in the United States would diverge hardly at all on the "emotional tone in written language"? So that you couldn't determine how anyone would think they displayed a bias?

The professors fail to offer one single sentence of content to back up their dismissal of bias. Can you imagine if NewsBusters said "the media is intensely biased against conservatives," and someone asked for evidence, and we couldn't quote a sentence or cite a single story? Would it sound convincing?

The overgeneralizations by these four professors are "full of sound and fury, signifying nothing."