Associated Press reporter Jonathan Lemire is a Morning Joe regular. His latest AP dispatch read like a New York Times editorial or an MSNBC rant. But AP didn't even put the disclaimer of "Analysis" on it. The headline was

As pandemic deepens, Trump cycles through targets to blame 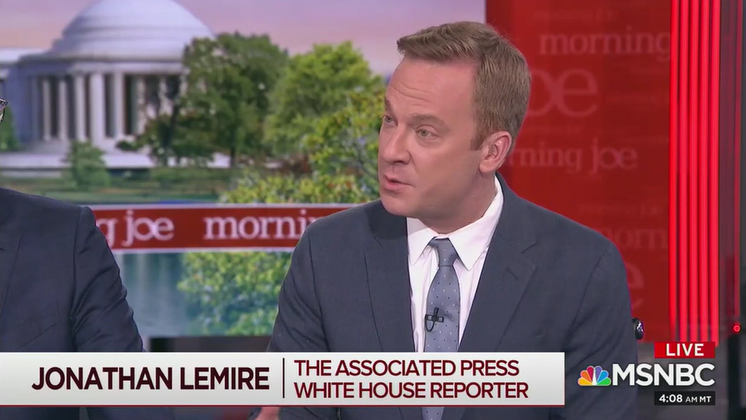 NEW YORK (AP) — First, it was the media that was at fault. Then, Democratic governors came under fire. China, President Barack Obama and federal watchdogs have all had a turn in the crosshairs. And now it’s the World Health Organization that’s to blame.

President Donald Trump is falling back on a familiar political strategy as he grapples with the coronavirus pandemic: deflect, deny and direct blame elsewhere.

As he tries to distance his White House from the mounting death toll, Trump has cycled through a long list of possible scapegoats in an attempt to distract from what critics say were his own administration’s missteps in slowing the spread of the coronavirus on American shores.

AP said Trump has his eye on November: "In the face of extraordinary electoral headwinds, finding fault elsewhere has become the directive for the president’s allies, according to four White House officials and Republicans close to the White House. They spoke on the condition of anonymity because they were not authorized to speak publicly about private conversations."

Lemire laments "Trump himself owns up to no mistakes," and then repeats the tired spin about the press briefings are a substitute for political rallies:

Trump has transformed the daily White House coronavirus task force briefing into a substitute for his canceled rallies, treating the James S. Brady briefing room like a stage in Ohio, Florida or Wisconsin. He has sparred with reporters, mangled facts and, at times, distanced himself from the advice of his own public health team.

There is no “The buck stops here,” like the sign once found on President Harry S. Truman’s desk.

“George H.W. Bush used to say that no one wants to hear the president of the United States say, ‘Oh, woe is me.’ And yet Trump is betting on the reverse,” presidential historian Jon Meacham said. ”Since ancient times, leadership has been about wearing a mask of command. Trump is the opposite — a bundle of insecurities, neediness and wants.”

Lemire only departed from the liberal line for one quote from Trump's 2016 communications director Jason Miller, that Trump was elected to take the brash and declarative actions that made him look like the proverbial "bull in the china shop."

People over 50 still think of the Associated Press brand as the definition of straight, objective reporting. That impression only lasts if you never read it.