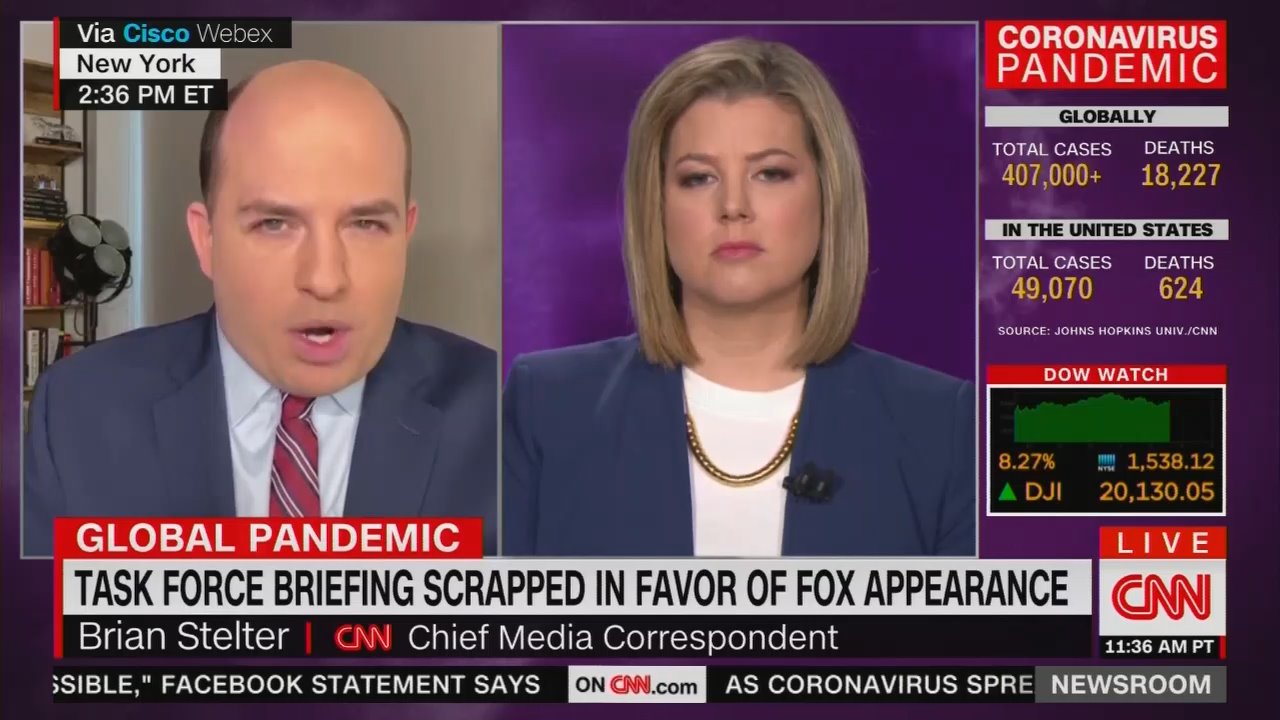 It's an odd complaint, since CNN has defined itself in this election cycle with a series of cozy town halls with Democrat voters questioning about 22 Democratic presidential wannabes.

Their idea of a tough anchorman question generally came from the left, like Anderson Cooper nudging Joe Biden last fall: "Your climate change plan talks about spending $1.7 trillion. There are other candidates out there who are talking about spending $16 trillion. Is your plan aggressive enough?”

Keilar complained the president "scrapped" the coronavirus task force briefing -- which happened a few hours later. Stelter answered "Yes, for a two-hour virtual town hall that had quite a bit of misinformation and wishful thinking that’s not based in reality.”

Stelter didn't offer anything specific on what was "misinformation." He just assailed Trump for dangerous talk.

STELTER: I understand the president wants to give a positive message to the country, and he wants people to know this will end someday, but he’s talking about returning to normal by Easter, that’s on April 12th this year, and public health experts say that would be incredibly dangerous. To suddenly go back to normal would be incredibly dangerous and would be devastating to the economy because so many more people would die. The president is out there on Fox saying this, and not getting challenged much, not getting pushback the way he at least gets at press briefings and would get on any other network.

Is that the opposite of misinformation, spreading fear that Trump lifting anti-virus orders would lead to lots of deaths? It continued:

STELTER: This is an example of the Fox News presidency at its very worst, because he can go on a channel that lets him say whatever he wants, doesn’t challenge him, goes so easy on him, he ends up misinforming the public, and by the way, it’s a feedback loop that’s been continuing, because he’s hearing these ideas on Fox about trying to open up the country right away, and then he’s repeating them on Fox.

Keilar then touted New York Governor Andrew Cuomo's press briefings as a "touchpoint" for understanding, and lamented Trump is "blaming Cuomo and also seems to just be minimizing human life." They don't like the president comparing death tolls. An estimated 1.2 million Americans die annually in car accidents, and there were more than 34,000 deaths in the last flu season in the US. The current US coronavirus death toll is 544.

Stelter added: "And for the hosts on Fox News, the news anchors like Bill Hemmer and Harris Faulkner, to not challenge that kind of BS? Well that’s a failure of journalism.”

On the very same afternoon on CNN, Dana Bash questioned Speaker Nancy Pelosi for 14 minutes and never "pushed back" on anything she said, never mentioning her daughter's Twitter endorsement of violence against Sen. Rand Paul. After the Stelter interview, Jake Tapper interviewed Joe Biden for more than 14 minutes, asking softballs, including about Fox!

TAPPER: The president had a town hall of some sort on his favorite channel earlier today. He mentioned you. I wanted to play it for you and get your reaction [plays clip]….Your response, sir.

CNN, the Softballs for Socialists Network.