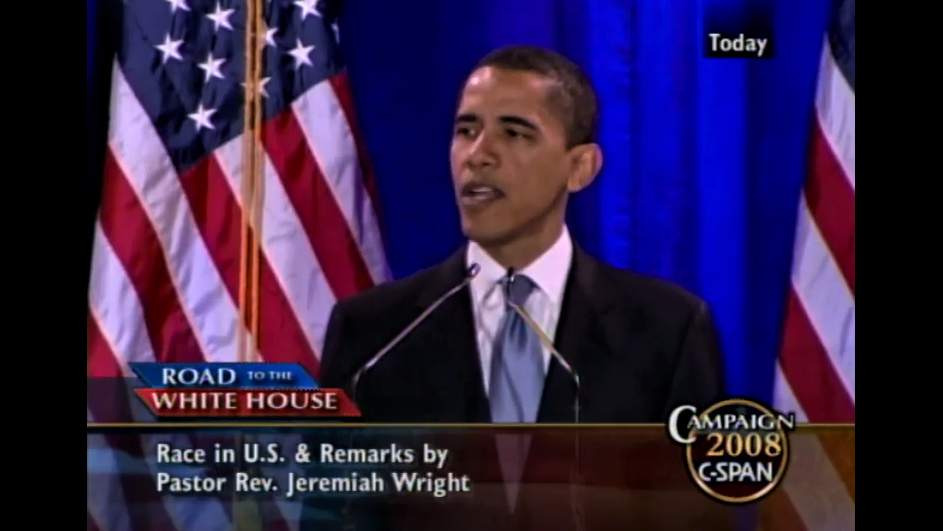 NPR demonstrates its liberal tilt in deciding what anniversaries are momentous. On Wednesday’s Morning Edition, host Rachel Martin turned to an Obama speech: “Twelve years ago today, a Democratic presidential candidate gave what some have called one of the best political speeches of all time. It was by Barack Obama. It was all about race, a speech called 'A More Perfect Union.' But a lot has changed since then when it comes to how America talks about race. And that got NPR's Sam Sanders wondering, does that speech hold up today?”

First came the usual mythology about how Obama dictated the speech right out of his commodious brain. Speechwriter Jon Favreau testified: “Even though the guy said he was going to give me stream-of-consciousness thoughts, he goes, 'here's what I want to say - one, one A, two, two B, C.' And he just starts going through this incredibly detailed outline for an hour on the phone.”

Sam Sanders explained that Obama compared Reverend Wright’s fiery leftist sermons with phrases like “God Damn America” to his own white grandmother speaking of black people with cringeworthy stereotypes. “Depending on who you ask, there would be no President Obama without 'A More Perfect Union.' But when I hear that speech now, I wonder if it would still work today. Since that speech, the Black Lives Matter movement happened. Charlottesville happened. That is a long way away from just forgiving your white grandmother's racist comments.”

He asked an Obama critic, Vanderbilt professor Tracy Sharpley-Whiting: “When the speech was done, there were already folks saying it's Obama's Gettysburg Address - whatever, whatever. Did you have those feelings?” She said no, because all that was at stake was Obama’s campaign for high office, and “he kind of got a pass.”

SHARPLEY-WHITING: He was symbolic of something that was necessary and needed. And for black folks, oftentimes, the symbol is more important than what cashing the check might also deliver. And so Obama was never forced to cash a certain check in certain ways by black people.

He also asked Alicia Garza of Black Lives Matter, who felt “Obama didn't do enough to tell people, all people, how much so much of our lives are still built upon racism and discrimination.”

So the debate was between Awesome Obama and Not Leftist Enough Obama.

Sanders recalled his Harvard days: "We were grad students in '08 when that speech was given, and a professor of ours stopped class twice in one week just so we could break down that speech line by line." He turned to a classmate, Jasmine Beach-Ferrara. "She told me the best parts of this speech are Obama using the nuance in his own story to speak to the nuance that exists in all of our stories."

This led him to conclude: "If you look at it that way, maybe Obama's big race speech, 12 years old today -- maybe it is still one for the books."

Flashback: Our Special Report in 2008 found the networks spent much more time on Obama's "race speech" than on all the crazy speeches from Reverend Wright combined.