Rush Limbaugh Rips Media on Virus: 'You Ought To Damn Well Be Ashamed'

In the last half-hour of Thursday's Rush Limbaugh show, America's leading talk-show host ripped into the press for its partisanship. On Wednesday, CNN's "Reliable Sources" newsletter reported  Limbaugh "floated a wild coronavirus conspiracy theory" that the virus "is being weaponized as yet another element to bring down Donald Trump."

Then CNN and the others promptly weaponized the virus, trashing President Trump for being unable to respond (or being too much of a liar to be trusted).

Early on Thursday (Eastern time), CNN Newsroom anchor John Vause brought in Democratic strategist Caroline Heldman to talk about the Democratic primary race, and then also about the political impact of the potential pandemic. He said "The thing I keep thinking about is potentially this is a huge problem for Donald Trump. At the same time, though, do Democrats have to be careful in how they use this sort of health emergency to attack the president?”

HELDMAN: I actually think this is a very good opening for Democrats. And, unfortunately, it’s become political, right? When you have Rush Limbaugh, for example, saying that the coronavirus is like the common cold, and it’s being used against Donald Trump. At the end of the day, this shouldn’t be political, but Donald Trump’s response has been so backwards on this that I think it’s an opening for Democrats.

That sent Rush into righteous indignation: 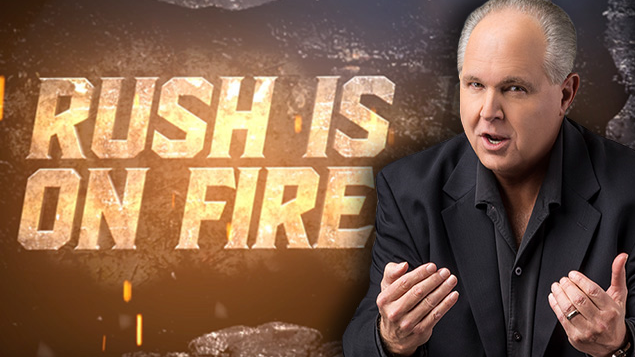 All you can see is killing the political fortunes of Donald Trump. That’s all you can see. And so the American people getting sick, a pandemic around the world is an opening for the Democrats.

You ought to go ask Pelosi, “Madam Pelosi, do you want to be seen as a party benefiting from the sickness of the American people? Because the media has claimed that this is an opening for you.”

“Hey, smiling, crying Chuck Schumer. Are you happy to be a Democrat known to benefit when the American people get sick?” You people in the media need to go ask these people if they see it the way you are portraying it about them. This is an opening for the Democrats, a potential pandemic, a potential deadly virus is an opening for the Democrats. How the hell does that work?...

Oh, it works because maybe the media and the Democrats can blame it on Donald Trump or claim that Donald Trump didn’t know how to stop it, as though people who can’t even count their own freaking votes in Iowa know how to fix this and stop it. So, yeah, it ticks me off, folks, especially when they make up a bunch of garbage about how I’m the one politicizing it.