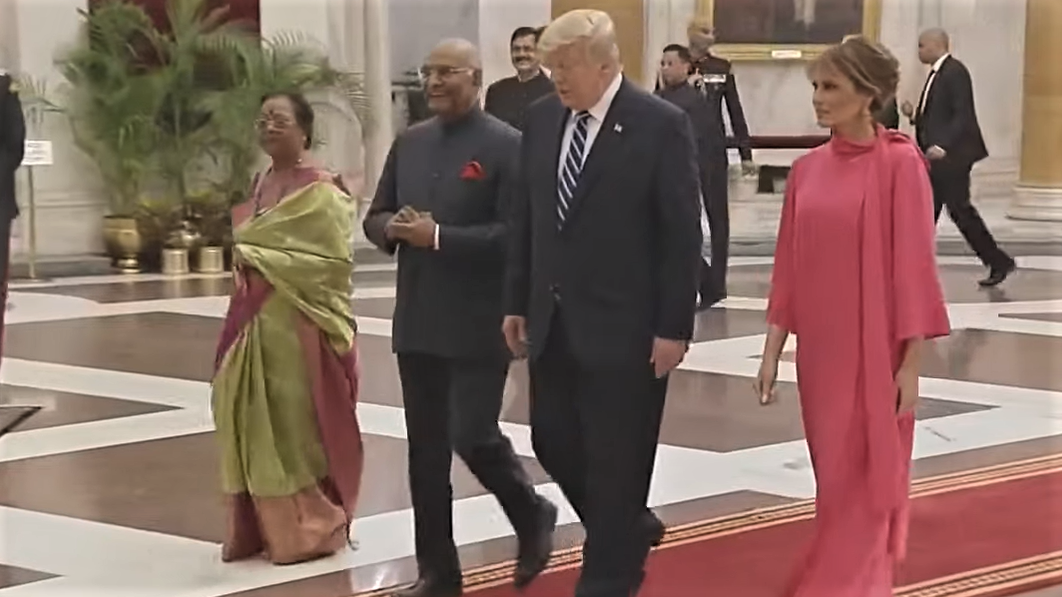 Yahoo News is spreading around one of the silliest British tabloid stories you can find. It's headlined "Trump and his entourage fail to eat anything from special vegetarian menu prepared for them on India trip." Tim Wyatt's story for The Independent (U.K.) started out waffling: "Donald Trump and his entourage reportedly failed to eat a single item of a special vegetarian feast prepared for him during his trip to India."

The American president and his wife, Melania, were presented with the menu during their visit to Gandhi Ashram in Ahmedabad, one of the former homes of the Indian independence hero....neither Mr. Trump nor the First Lady touched anything from the special high tea menu.

“Some food items were arranged for the members of the visiting delegation, but neither the US President nor the First Lady had anything during their visit to the Ashram,” one of the Ashram’s trustees, Kartikeya Sarabhai, told the PTI news agency.

Then Wyatt reported the chef at the ashram upset the Indian masses by making non-traditional samosas -- instead of potatoes and peas, he instead filled them with broccoli and sweet corn. How this would be "more American" is anyone's guess. This, too, was defined as "infamous."

Rachita Prasad, another Indian journalist, said: “If you change a samosa’s fillings, you are playing with feelings! #BroccoliSamosa is NOT a samosa."

Others apologised “to entire humanity” for the now infamous samosa, while the Indian-born American host of the reality TV show Top Chef, Padma Lakshmi, said simply: “Trump is the broccoli samosa of people.”

Thankfully for Mr Trump, later during his visit he stayed at a luxury hotel in New Delhi, where the presidential suite had been amply stocked with Diet Coke and cherry vanilla ice cream in advance of his arrival.

Wyatt ended this "infamous" story by reporting "Mr Trump’s love of fatty fast food had got him in trouble back home, it emerged recently." The New York Times ended a recent article on how Ronny Jackson, who worked as the president’s doctor, tried to improve Trump's health: "We were making the ice cream less accessible, we were putting cauliflower into the mashed potatoes.”

Then Wyatt noted Trump's last physical revealed he had gained four pounds and was classified as "obese" for weighing in at 243.

The #BroccoliSamosa is a miserable snack. Not a single person finished a full one! Wish there was something genuinely Indian for high tea rather than this bastardised version of our yummy #samosa.
Bad menu choice for #NamasteTrump @realDonaldTrump #India at #SabarmatiAshram pic.twitter.com/N2YiUb4c3I