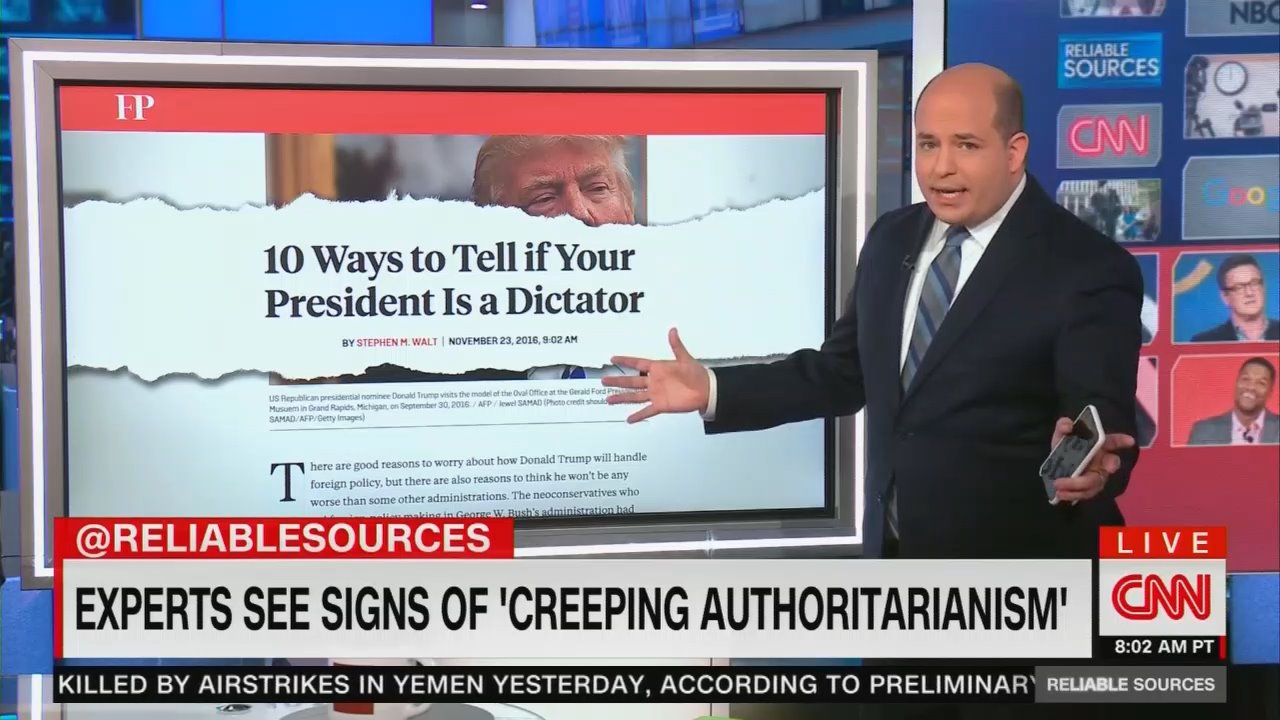 They call it the Cable News Network, but on some shows, it's the Cable Olds Network (CON). They just keep repeating the same old spin. Like Reliable Sources host Brian Stelter's obsession with how Trump represents Creeping Authoritarianism...even if there are no journalists being dragged to prison camps. Within a month of Trump's victory, Stelter was demanding that journalists use the A-word.

Perhaps Brian was inspired to do another Sunrise Semester segment after seeing Elizabeth Warren echo his party line to Anderson Cooper last week: "In front of our eyes, we are watching a descent into authoritarianism."

Stelter led off his show Sunday with another six-minute lecture about how Trump represents something called "democratic backsliding," as he read from the book How Democracies Die and an article titled "10 Ways to Tell If Your President's a Dictator."

But first, the aspiring autocrat and the media's response. As this banner on Fox says, President Trump is unleashed. That's why there are growing fears of something called democratic backsliding. This is a term used in political science, a term used to describe the erosion of institutions that sustain democracy.

Another way to put it is creeping authoritarianism, a move toward autocracy. Now, that's a word we're increasingly seeing being tied to President Trump. You can see it in some of these headlines in the past week, Trump's authoritarian style is remaking America, things like that. Now, a lot of these are opinion columns, perspective pieces, but these are important and complicated concepts.

My question for you is, how can the nation's news media make time and space to explain this? I mean, we live in this news story every minute, info-saturated world. But this may be one of the biggest stories of them all. So, what are the best ways to cover it?

Well, one way is with a list. Harvard professor Stephen Walt has been keeping a checklist ever since 2016. He called it "10 Ways to Tell if Your President Is a Dictator". Now, he wasn't saying Trump is a dictator. But he was watching for troubling signs.

So, he revisited the list this week and you'll notice the checkmarks here. He said, after impeachment, the president has been passing most of the checkpoints on the way to authoritarianism. On his list are things like fearmongering, demonizing the opposition, and using state power to reward corporate backers and punish opponents. Does that sound familiar?

Liberals definitely "demonize the opposition." (That's what Stelter is doing!)

In the end, this is all a repeated smear. It shouldn't pass the "independent fact-checker" test. Criticizing the press -- even proposing a budget cut for public broadcasting -- isn't dictatorship. But Democrats used this panicky line to get more Democrats elected in 2018.