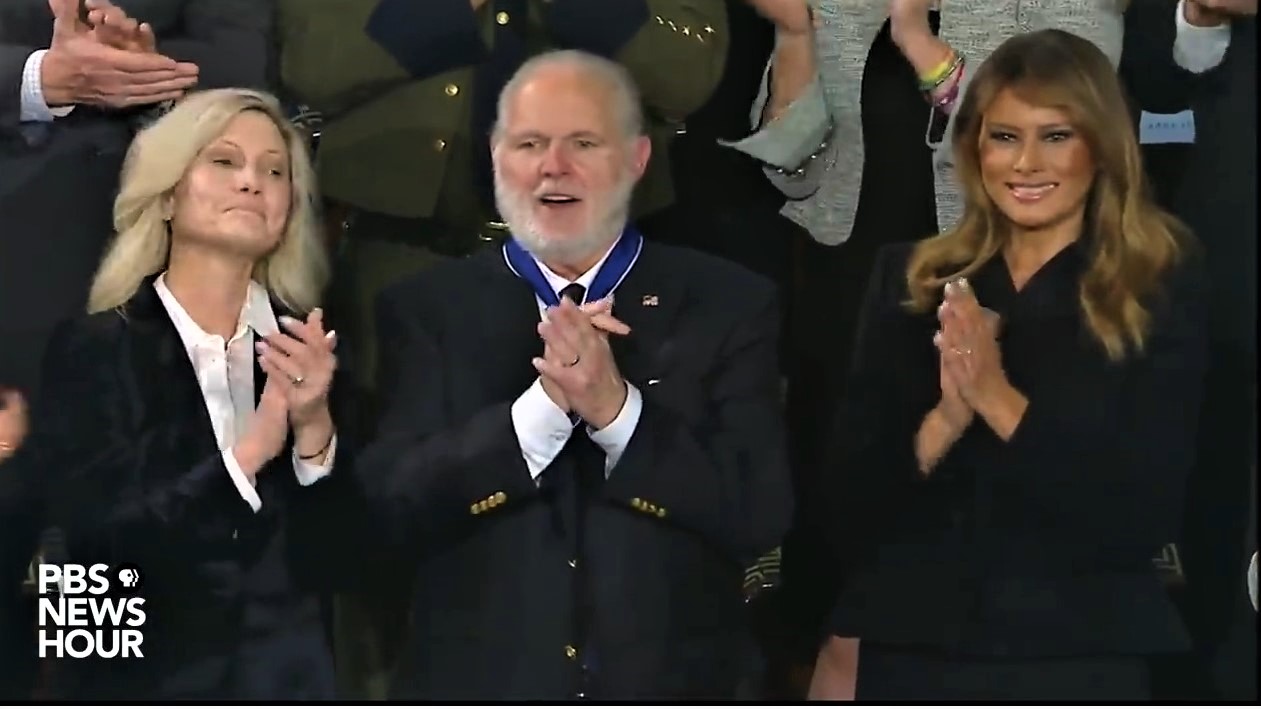 The leftist "fact checkers" at Snopes have routinely gone after the Babylon Bee for writing satires that less intelligent Americans might mistake as real, such as....CNN buying a huge washing machine to spin its news.

But at least it's spreading its battle on satire sites in defense of both sides. Two recent "fact checks" defended Rush Limbaugh after he made the news with his heart-breaking announcement of his advanced cancer, and President Trump giving him the Medal of Freedom during the State of the Union address.

Not everyone was touched and amazed by this event. Liberal hate commenced.

Snopes cited a satire on DuffelBlog from 2013 that made another round of social media. (I found this on my own Facebook feed....presented as factual, which, well, suggests Snopes is right about some people, when confirmation bias kicks in.)

From the upscale Palm Beach corporate headquarters of his Excellence in Broadcasting Network, right-wing radio host Rush Limbaugh unloaded on America’s men and women in uniform, insinuating their motives as less than pure.

In this satire, Limbaugh supposedly portrayed our soldiers as "getting ice cream for free...you are not a defender of the nation. You're a welfare queen -- or more appropriately, a welfare grunt."

The only people who would believe this are people who have never spent five minutes listening to the Rush Limbaugh program.

Snopes also singled out The Onion, which is the most famous Satirical Fake News site on the internet. Babylon Bee's operators objected to how Snopes largely ignored the Onion.

They ran a satire headlined "Rush Limbaugh Admits Presidential Medal Of Freedom Less Of An Honor Knowing That Rosa Parks, Maya Angelou Also Received It." The Onion imagined in its comedy that Rush talked himself into keeping his medal:

“I almost sent it back. But instead I have decided to keep my Medal of Freedom and let it stand as a testament to my willingness to tolerate others. I hope my acceptance of it will go some way toward reclaiming this honor from the Martin Luther Kings and Nelson Mandelas of the world.”

MRC founder and president Brent Bozell spoke for many in his tribute to Rush at FoxNews.com:

He is unapologetically the True North for an entire movement, the clarion call of personal liberty, a champion of national defense and a defender of a civil society. Millions around the country turn their radios on at noon every day, as they have week after week, month after month, year after year, to hear his take on whatever current event is dominant, knowing he'll always come through.

We have rated this "fact-check" by Snopes.com as The Real Deal, even if we like to think people can make out a satire. For similar analyses, please visit our Fact-Checking the Fact-Checkers site.