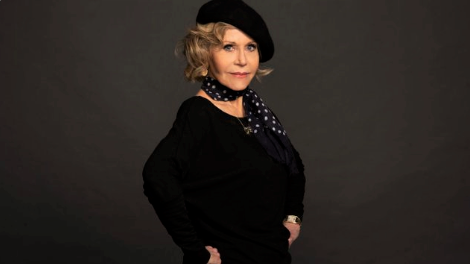 Sunday's Washington Post Magazine offered a softball interview to Jane Fonda on her climate change activism, with this quote pulled out: "If necessary, we're going to have to shut the government down. And that's not radical. What is not radical is not doing anything."

This wouldn't be celebrated if the interviewee was say, Ted Cruz.

Her interviewer, K.K. Ottesen (author of the photo book Activist: Portraits of Courage), did mention the "sitting on the enemy aircraft gun" thing in Vietnam, noting Fonda said "I will go to my grave regretting that."But mostly, it was publicity for her "Fire Drill Friday" protests on Capitol Hill. Why now?

I got an electric car. I stopped using single-use plastics. I’m not eating red meat, or very rarely. All those things. But I knew it wasn’t enough. And then, over the Labor Day weekend, I read Naomi Klein’s book On Fire: The (Burning) Case for a Green New Deal. It cannot be business as usual. So I wanted to do something that will get attention, to support Greta [Thunberg] and the student activists to raise the sense of urgency. I wanted to show that we have to leave our comfort zone. We have to get used to being in the streets.

(And then the "have to shut the government down" stuff.)

Fonda just turned 82, so she talked up going to prison -- although she's avoided protesting enough to go to jail:

I feel quite young, actually, now, even though it takes me forever to get in and out of a car! [Laughs.] And if I have to sleep on a metal bed at a jail, it’s going to hurt more than it would have 30 years ago. But the malaise is gone. I mean, I’m scared to death, but I know that I’m doing what I need to do.

Sunday's magazine did not include the part of the interview you can read online where she talked about visiting Communist Party fixture Angela Davis at a jail in California, and her father Henry Fonda saying "If I find out that you're a Communist, I'm going to be the first person to turn you in." She said "I went to bed and pulled the covers over my head and cried for a day." No one went to jail in the Vietnam era for being a communist.

But Fonda is staying consistent in her uber-wealthy elitist crusade against capitalism. The Washington Post can't seem to acknowledge this movement, and their vaunted Green New Deal, is all about radically remaking the American economy and turning us into a socialist country.