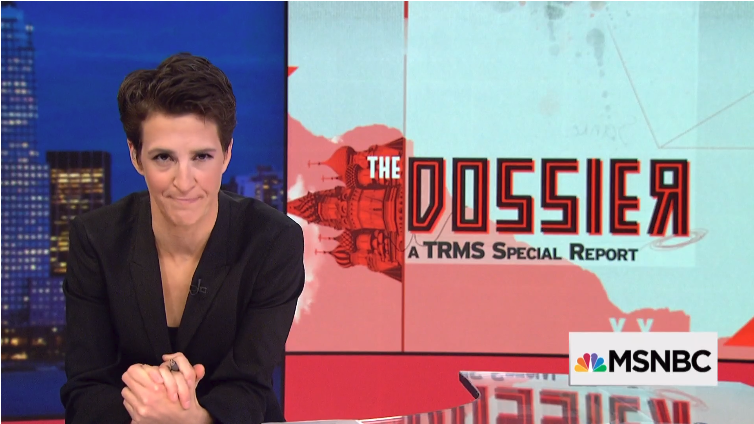 Washington Post media blogger Erik Wemple has been a fierce critic of Fox News in the Trump era. So it’s notable that he’s done six pieces on the collapse of the discredited Christopher Steele dossier, and no article drew more notice than this one on Thursday: “Rachel Maddow rooted for the Steele dossier to be true. Then it fell apart.”

Wemple laid out a timeline of Maddow boosting the credibility of the dossier repeatedly in 2017 and 2018, even after the Mueller report found no collusion between Russia and the Trump campaign. On October 5, 2017, she said  that Steele had “a lot” of the dossier “dead to rights.”

On December 8, 2017, she aired a "special report" on the dossier (and MSNBC re-ran it on December 29, 2017). She said “Above all else, we know this about the now famous dossier: Christopher Steele had this story before the rest of America did. And he got it from Russian sources.”

Two years later, on the day Justice Department inspector general Michael Horowitz “released his punishing report — with all its assertions about the dossier’s dubiety — Maddow chose not to focus on the integrity of the document that she’d once claimed was accumulating credibility on a nearly daily basis.” Instead, she hit the liberal talking point that he “debunked” the notion of political bias in launching the Russia investigation. “Since that Dec. 9 mention, the dossier has gone in hiding from The Rachel Maddow Show.”

The case for Maddow is that her dossier coverage stemmed from public documents, congressional proceedings and published reports from outlets with solid investigative histories. She included warnings about the unverified assertions and didn’t use the dossier as a source for wild claims. There is something fishy, furthermore, about that Mueller footnote regarding the “tapes.” In their recent book on the dossier, Crime in Progress, the Fusion GPS co-founders wrote that Steele believes the document is 70-percent accurate.

The case against Maddow is far stronger. When small bits of news arose in favor of the dossier, the franchise MSNBC host pumped air into them. At least some of her many fans surely came away from her broadcasts thinking the dossier was a serious piece of investigative research, not the flimflam, quick-twitch game of telephone outlined in the Horowitz report. She seemed to be rooting for the document.

And when large bits of news arose against the dossier, Maddow found other topics more compelling.

She was there for the bunkings, absent for the debunkings — a pattern of misleading and dishonest asymmetry.

But what really makes your jaw drop about Maddow's dishonesty is the podcast interview she granted to Michael Isikoff of Yahoo News (who also was a participant in reporting/promoting the dossier):

ISIKOFF: Do you accept that there are times that you overstated what the evidence was and you made claims and suggestions that Trump was totally in Vladimir Putin’s pocket and they had something on him and that he was perhaps a Russian asset and we can’t really conclude that?

MADDOW: What have I claimed that’s been disproven?

ISIKOFF: Well, you’ve given a lot of credence to the Steele dossier.

ISIKOFF: Well, you’ve talked about it quite a bit, I mean, you’ve suggested it.

MADDOW: I feel like you’re arguing about impressions of me, rather than actually basing this on something you’ve seen or heard me do.

After some back and forth about the Mueller report, Maddow complained: “You’re trying to litigate the Steele dossier through me as if I am the embodiment of the Steele dossier, which I think is creepy, and I think it’s unwarranted."