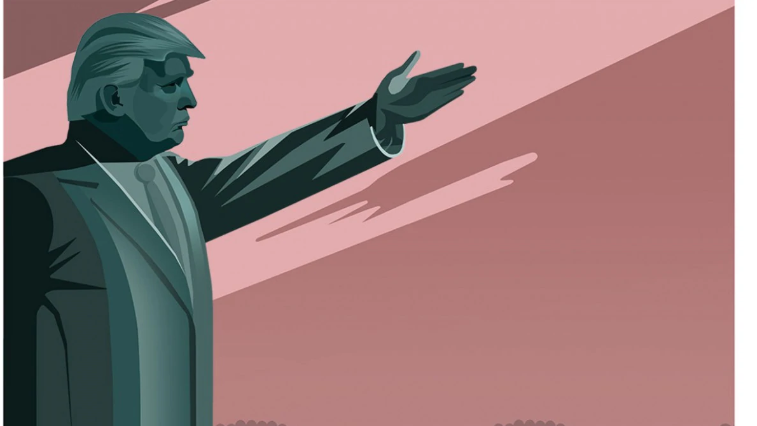 On the day after Christmas, The Washington Post Style section published an article on "6 books whose writers seemed to predict our reality." Once again, the Post definition of "reality" seems to be chemically altered or emotionally overwrought, since George Bass began with a passing reference to Margaret Atwood's The Handmaid's Tale and announced "almost 35 years later, here we are in a dystopian patriarchy."

The last of Bass's six listed books was It Can't Happen Here by Sinclair Lewis, a book warning of the rise of American fascism. The Post summarized it as "Making America Great, Part 1."

This newspaper has already detailed how Trumpism was cloned from Lewis’s dystopian satire [hat tip to Carlos Lozada en fuego]. But frankly, the similarities between Berzelius “Buzz” Windrip, the populist president, and today’s Republican administration are so strong that they’re worth underlining.

A leader who brands himself champion of the “Forgotten Men”? Check. Swipes at “highbrow intellectualism”? Deposed allies? Broken electoral promises? It seems it was all there in 1935, right down to the Canadian visa frenzy. Nineteen Eighty-Four might be the most lasting political book ever written, but It Can’t Happen Here predicted 2016 and beyond with such aplomb that it should be filed under astrology.

Fact check, please? The Lewis plot summary involves a populist president (running as a Democrat, promising to give each family a government subsidy, a la Andrew Yang) who creates a totalitarian state. How on Earth is that an accurate depiction of America under Trump? Who needs to put down the crack pipe?

After his inauguration, Windrip moves rapidly to consolidate his power. He makes his private militia, the Minute Men, an official part of the US Army and ends the power of Congress and the Supreme Court, making himself the unchecked leader of the country. “Temporary” martial law is declared and resistance is violently put down by the Minute Men.

Windrip also implements labor camps for the unemployed, and suspected dissidents are rounded up and sent to concentration camps. Women, African-Americans, and Jews have their rights suppressed, and Sarason constructs a massive propaganda apparatus that takes over newspapers and schools.

We have no martial law. There is a vibrant Congress (presently impeaching the so-called dictator) and Supreme Court. There are no concentration camps for dissidents. Women, African-Americans and Jews have not been suppressed.

Even Lozada explained "As the novel progresses, Windrip detains them and takes over their publications, producing puff stories exalting the governing 'Corpos,' members of the newly created American Corporate State and Patriotic Party."

So which publication has been taken over by the president? Which reporter has been detained?

The Post is apparently just catching up on this nasty and unfounded insult -- which was uncorked before the 2016 election by The Guardian and The New Yorker, and during the transition period by the Daily Beast and The New York Times. But Trump has been president for 1,072 days, so calling this book "reality" is especially un-factual.