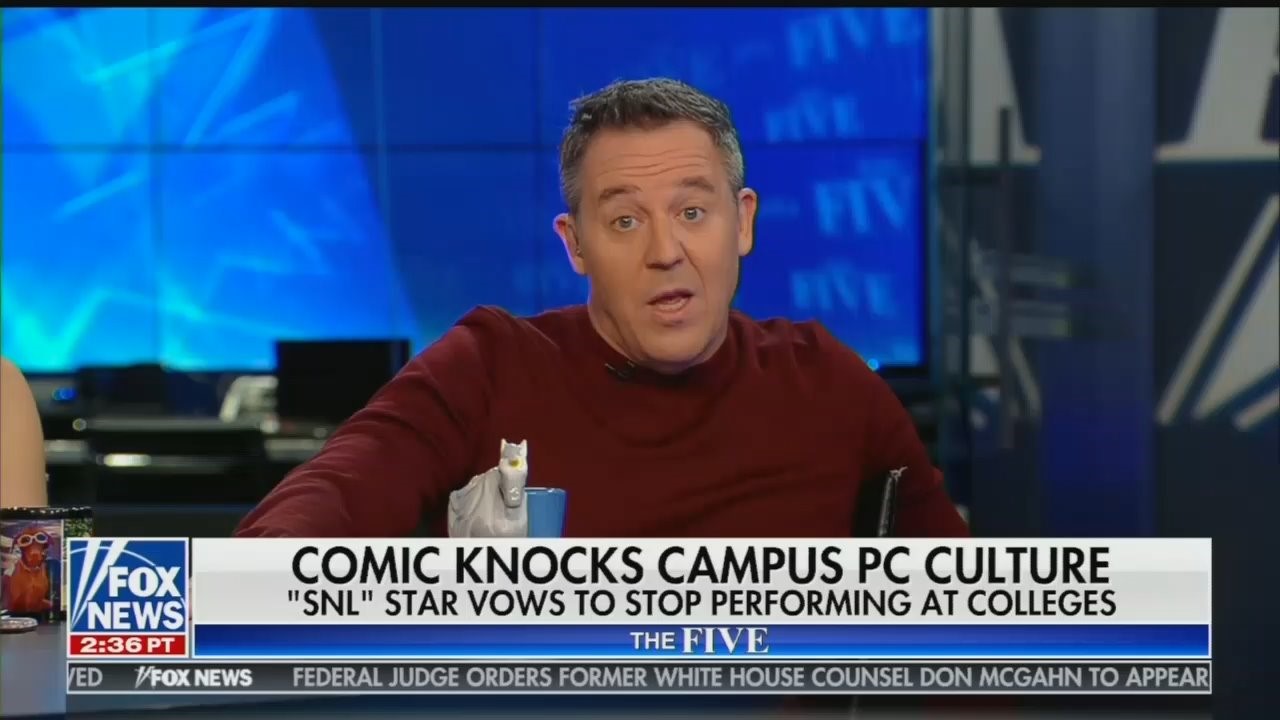 On Fox's The Five on Tuesday, co-host Greg Gutfeld launched into a monologue about how comedians are swearing off performing on college campuses. The latest to walk away is Saturday Night Live cast member Pete Davidson, who "many people" -- to use NBC News argot -- think isn't the least bit hilarious.

“I refuse to do a college after this year 'cause it's like, you're just setting yourself up for trouble,” Davidson told Papermag.com.

“Comedy is just, like, getting destroyed. Standup's about to be about, like, sneakers. Like, 'Hey, everyone like sneakers?' You can't talk about anything. You can't. The second you open your mouth and have an opinion, you lose money today. And I don't think that's a safe place to live in."

GREG GUTFELD: He's not the first to write off the home of dwindling free speech. Both Seinfeld and Chris Rock have also ditched academia as the toxic mold of humorlessness spreads. So why is it getting so bad? Two words: identity politics. I can't even list the offended without triggering outrage.

Once the modern left made identity the center of one's being, they created endless varieties of grievance, which then creates the same number of potential offenses. There are now more identities than people, as thick skins have been replaced with open wounds. [America is] no longer a country based on rugged individuals. Among the young, they’ve been replaced by cowardly mobs.

So what can today’s comics say to those who demand to be shielded from uncomfortable truths and offensive jokes? It would be great if they said something. But rather than share the risk, they bail.

The front lines of speech seem in retreat, leaving all but a few to fight on. It’s up to us to reward the fighters and ignore those who don't. If not, the joke will be on all of us. And no one will be laughing, because we'll all be suing.

Gutfeld turned to Fox's Emily Compagno to discuss further. He asked "Shouldn't comedians go to the places and dare to be cancelled like we do on this show?"

She replied "That's the aim but the reality is people are getting cancelled. People are getting denied. People are locking arms at UC-Berkeley so that other students can't penetrate to attend a talk. I wish that Pete Davidson and people like him could be brave enough to say 'yeah, I'm gonna do it anyway.' But the reality -- I mean, why?  Why should he do it? So he can get cancelled so people won't be able to attend? "

Compagno lamented that she used to go to school in "totally liberal" San Francisco and worked for the Federalist Society there, where she helped find the "unpopular" conservative half of debates, but that those forums always welcomed a debate, even if they slammed the right-leaning side when it was over, and that's not true on campuses, where "ignorance is what is preventing that actual discourse."