Rosen pointed out how Rep. Adam Schiff told Republicans on Wednesday he would be protecting the anonymity of the Ukraine whistleblower and asked "I wonder if you could explain to the American people why the legal rights of the whistleblower should prevail in this political setting over those of President Trump, who should ordinarily enjoy a right to confront his accuser?"

“I will say this to you, Mr. Republican Talking Points, when you talk about the whistleblower, we’re coming into my wheelhouse," Pelosi spouted. "I have more experience in intelligence than anybody in Congress, than anybody who has ever served, 25 years on the committee as top Democrat, ex officio, as speaker and leader. I was there when we wrote the whistleblower laws."

"The whistleblower is there to speak truth to power and have protection for doing that, any retribution or harm coming to a whistleblower undermines our ability to hear truth about power," she added. “The president will be held accountable, and nobody should have the right to endanger whistleblowers.”

Don't go looking for the usual scolds of Trump's fighting with reporters (such as CNN's Brian Stelter) to say anything about this exchange, on Twitter or on TV. CNN's Oliver Darcy was too absorbed with hot takes about Fox's "alternative universe."

Rosen, who was investigated by Obama's Justice Department when he worked for Fox News (down to seizing his parents' phone records), took to Twitter to object to Pelosi's Trumpy putdown: 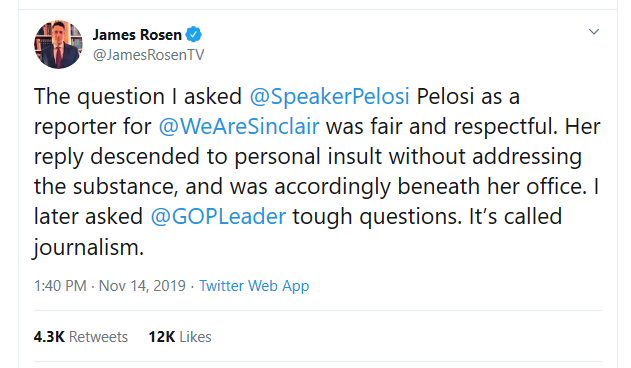 He later tweeted video of his question to Pelosi, and to House GOP leader Kevin McCarthy: "You are against hearing from witnesses who have first-hand knowledge of the president's thoughts and statements?"