On the November 7 edition of The Situation Room, CNN host Wolf Blitzer asked Democratic presidential candidate Andrew Yang what he's hearing about impeachment on the campaign trail in New Hampshire. Yang hears a yawn. He said he gets "very, very few" questions about it. That has to be difficult to hear on a network devoted to being Impeachment Central.

WOLF BLITZER: You just wrapped up a town hall in New Hampshire. You're up there, very actively on the campaign trail. Let me ask you this. What are you hearing from voters about impeachment?

ANDREW YANG: You know, Wolf, I get very, very few questions about impeachment. The fact is, when we're talking about Donald Trump, we are not presenting a new vision that's getting people excited. The voters here in New Hampshire see it the same way I do, which is that impeachment will not help move the country forward and talk about Donald Trump is a loser for Democrats even if it's in the context of impeaching him.

Blitzer then asked about the calendar: if the House voted to impeach by Christmas, then the trial might coincide with the Iowa caucuses and the New Hampshire primary. He asked Yang "Do you worry about that dominating the news and the race for the democratic nomination becoming a distraction?

Yang agreed: "I think that would be terrible timing for the Democratic field. We have to face facts that not a single Republican crossed the aisle for the house impeachment vote. And if that plays out in the senate, then Donald Trump is likely to not be successfully impeached. I expect him to be there for me to defeat at the ballot box in 2020."

Blitzer then asked if they should speed this whole process up: 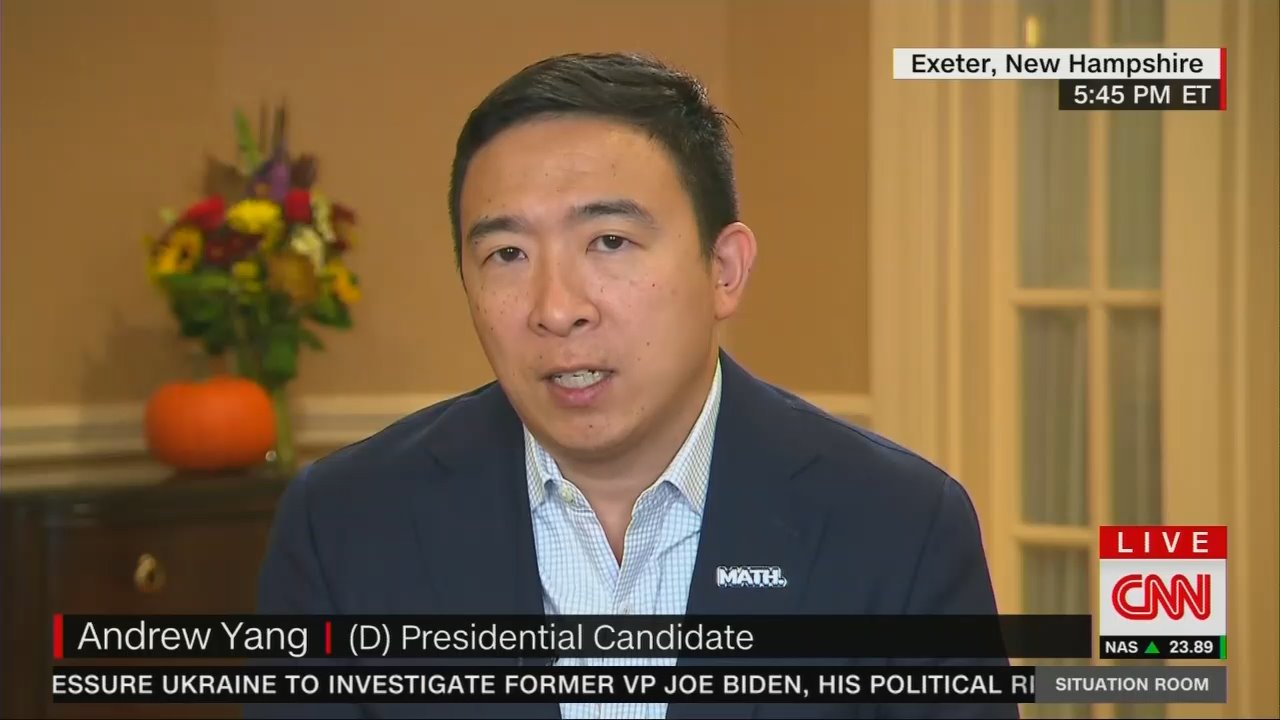 BLITZER:  Would you like to see impeachment wrapped up on an expedited timeline or should the house take its time to lay out all the alleged wrongdoing by the president?

YANG: I think the sooner the better and then we can get our focus back to beating Donald Trump, if he's still there, which I expect him to be. So, if the timeline plays out where half the Democratic field is in D.C., listening to testimony through the crucial month of January, I don't think that's a good thing.