Now this is an Epic Satire Fail. Saturday Night Live went on the air at 11:30 pm Eastern time with an opening skit where Alec Baldwin's Very Fake Trump was thanked by Pete Davidson's Very Fake ISIS Member for "bringing jobs back...for ISIS." Six minutes before, Jennifer Griffin of Fox News was tweeting that ISIS leader Abu-Bakr al-Baghdadi may have been killed in a raid by U.S. forces in Syria. John Santucci of ABC reported it via Twitter at 11:53.

TRUMP: My followers love books, except the new anonymous book about me, called A Warning. My lawyers told me not to say this, but if I find out who the author is, I'm going to shoot them in the face on Fifth Avenue.

TRUMP FAN: Oh yeah. And I would be honored if you'd use my gun!

TRUMP: Oh, no, no, no. Thank you very much for coming.

TRUMP FAN: Well, the Earth is flat and Beyonce is white!

TRUMP: So great to see a young Trump supporter.

TRUMP: And where are you from? New Mexico?

ISIS MAN: ISIS! Yeah, I was a prisoner in Syria until last week when you freed me, so, I just wanted to say, thank you for bringing jobs back. To ISIS. And I promise that I will make ISIS great again! Whoo!

TRUMP: Terrific. What a great guy. ISIS is back in a big, big way, folks. And we love that, don't we? Okay.

Update: "Weekend Update" mentioned Trump's "something very big has happened" tweet, and made a McRib joke at 12:19:

'Saturday Night Live' DID notice Trump's "big news coming" tweet at 12:19 am...and made it fun of it. The al-Baghdadi news had broken by then. pic.twitter.com/IgfHX5hvG7 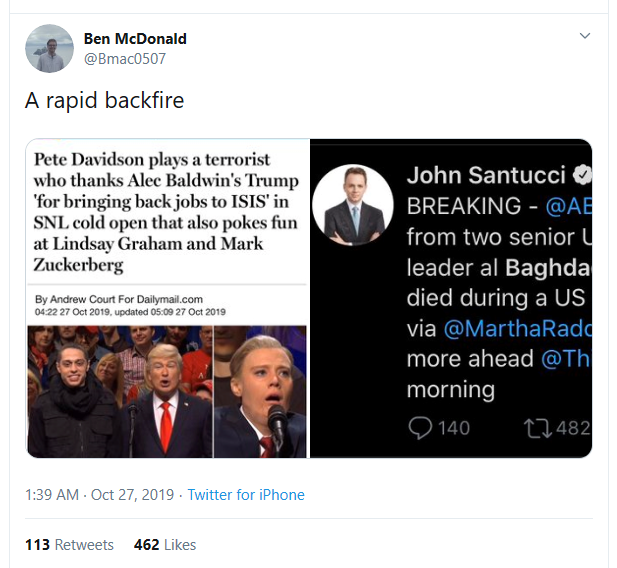