Both Trump and Butt? WashPost Hails 'How the Sexy Peach Emoji Joined the #Resistance' 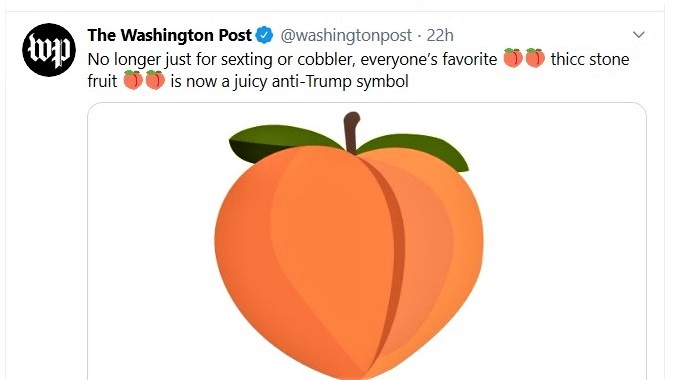 Silliness keeps erupting from The Washington Post, from the supermarket aisles to the fruit stand. Post writer Maura Judkis wrote an entire article headlined "How the sexy peach emoji joined the resistance."

Judkis began: "If you want to understand how the peach emoji has come to represent both the potential impeachment of President Trump and a butt, you must first look to the ancient Sumerians."

What are they vaping over there at the Post?

When the singer Lizzo put the peach emoji on Twitter to tout "IM [PEACH] MENT," she "may not have known she was referencing 6,000 years of the evolution of human language last week when she tweeted a message that has more than 120,000 likes — and helped take the peach from sexualized to politicized."

The media are involved. New York Times columnist Maureen Dowd wrote a column titled "Impeaching the Peach One." Time magazine hinted at impeachment back in March with a peach-with-Trump's-face cover.

Judkis can't quite point out this is a left-wing thing, even though it obviously is: "In certain online circles, the peach is becoming a protest emoji — much like how some use the rose emoji to signify that they are supporters of the Democratic Socialists of America. Impeachment supporters put it in their Twitter bios."

The president being a buttface (or a poopface) is all the rage on the oh-so-sophisticated Left:

Sales of Trump-themed peach emoji stickers and pins have picked up in the past week on illustrator Nick Lacke’s Etsy store. He first designed the impeachment pins a year after the election, as a follow-up to another successful pin of his, which featured the poop emoji with the president’s face. He appreciated the multiple layers of meaning in the peach emoji — the impeachment pun, the color of the fruit evoking the president’s tanned skin tone and the original slang meaning of the peach emoji.

“It’s like, ‘Oh he’s a buttface,’ so it’s like, very intellectual, multilayered high art, I like to think,” he joked. “Enamel pin culture is about having a visual marker for different aspects of your personality and your interests. . . . It’s less me being like, ‘I think he should get impeached,’ and more me creating something for people to get a laugh out of.”

Just keep pretending that the Post isn't part of the Democrat/socialist complex...as long as you don't check out the paper and stare reality in the face.