The Washington Post is perennially sneering at conservatives, as you can see from this Friday story: "Greetings from Mike Pence’s parallel universe. It’s Constitution Day at the Heritage Foundation." Whose parallel universe? Post political writer Ben Terris expects that everyone lives in the world of liberal impressions that The Washington Post is creating. He began: 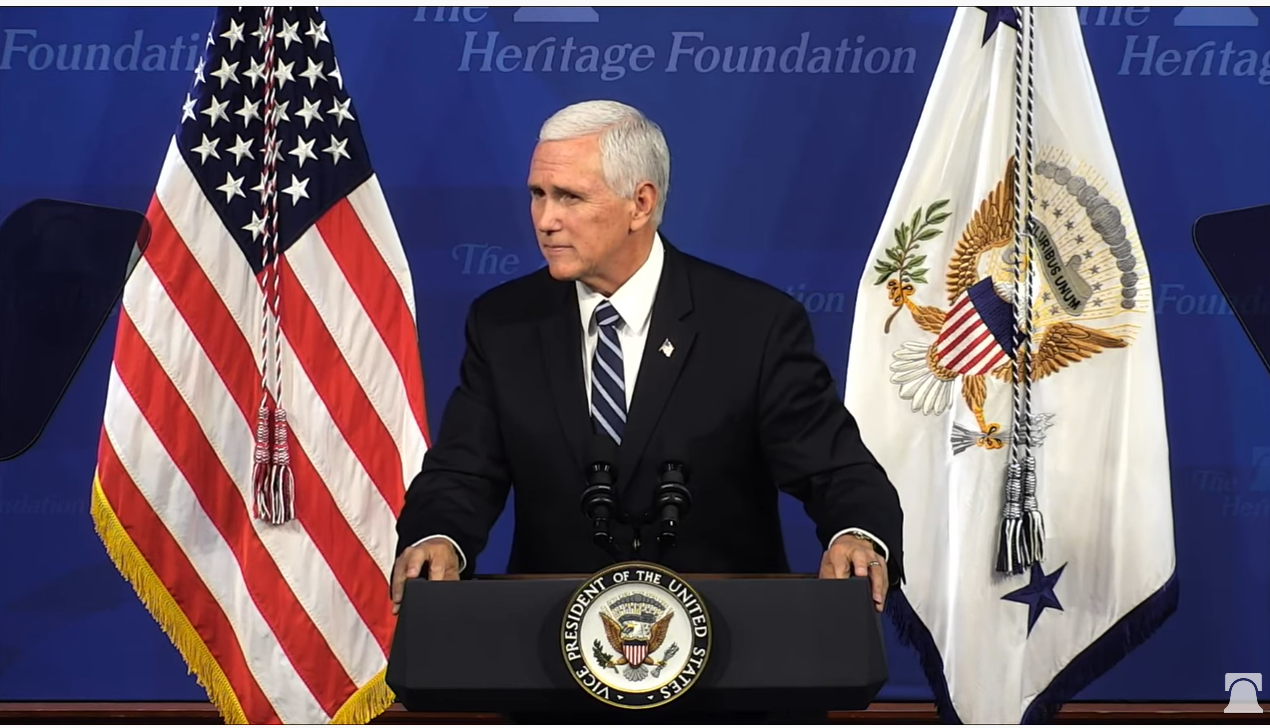 The vice president is onstage at the Heritage Foundation wearing a permanent squint like he’s auditioning for a Ronald Reagan biopic, as serene as a married man eating a business lunch without a woman in sight.

“On this Constitution Day,” he says, “I’m proud to report that we’ve also been standing strong for the Constitution itself, with the principles of limited government, for the values enshrined in our founding documents.” [Video here.]

The Post imagines they embody the Constitution, that they insure the rule of law and the separation of powers and the freedom of the press, and so on, and so on. They're the angels in their own Bible. Pence somehow ignores their universe, and their instruments of accountability.

Pence acts as if conservatives can celebrate the Constitution "without feeling like the country is ricocheting between crises: no impeachment hearings, 'urgent' whistleblower complaints about promises made to foreign leaders, or ethical concerns about the military spending big bucks at Trump properties."

Put the stress on the word "feeling." The media like to set the stage, compose the mood music, establish the ambience. "Chaos" and "crisis" are their favorites in this era.

In this place, Pence can be as unchanged as the Cool Whip hair he’s had for decades.

He had once been uncertain about Donald Trump but no longer. According to Politico’s Tim Alberta, the Indiana governor had wondered in 2016 about whether being Trump’s veep would hurt his reputation. “You’re still going to be Mike Pence,” a friend reportedly answered.

So here he was, three years later, reassuring Republicans that nothing was different. If he hadn’t changed, maybe they hadn’t changed.

With all the crisis mood music going on, there's not supposed to be a feeling of satisfaction that some conservative things are getting done. Terris briefly acknowledges conservative happiness as he disparages Heritage: "This is a place where public speechifying is boring and slick, where the Federalist Society gets its judges, where almost any regulation can be relaxed, where the military is as muscular as ever, and where, if you squint like Pence, nobody has anything to be disturbed by or ashamed of."

Then Terris went off on a tangent mocking Sebastian Gorka as "a glitch in the Matrix, a clue, a visitor from another universe — one where things are not normal at all. He sat near the front, a diving bell of a head, crystallized product glinting in his hair and dusting his coat jacket."

Terris wondered "what has Pence earned for all his stoic and pious politicking — for pretending the crude comments (from “shithole countries” to “goddamn”) don’t offend his evangelical Christian sensibilities? For ignoring the country’s ballooning deficits or the praise heaped on foreign adversaries? Rumors that he may be booted from the 2020 ticket."

Yeah, as if the Post spent the trillion-dollar deficit years of the Obama era mocking the Democrats for ignoring the country's ballooning deficits? People at Heritage were not delighted with either performance, but the Post is only remarkably consistent in offering liberal-pleasing "news."