CNN claims its Reliable Sources program "examines the media world -- telling the story behind the story -- how the news gets made." But Brian Stelter's show, and his Reliable Sources newsletter have become something much different. It's become first and foremost about ranting against President Trump as a liar, as a racist, as mentally unfit, as a budding authoritarian -- in short, it's drenched in leftist ideology. Journalism is secondary.

Stelter's newsletter after the Mueller hearing effectively demonstrates this. Instead of leading his newsletter with an examiniation of "how the news gets made," subscribers were subjected to a passionate denunciation of Trump under the words "Big Lies," borrowing the Washington Post Fact Checker's cartoon Pinocchios. 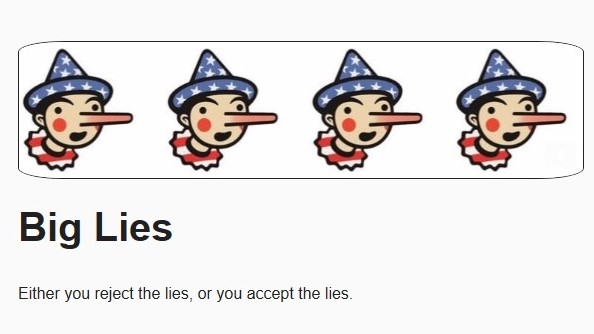 Stelter began (emphasis from the original):

Either you reject the lies, or you accept the lies.

Of all the divides in American life today, this is the divide I keep thinking about. President Trump and his allies lie with reckless abandon. They make dishonest politicians from the past look like amateurs. When they get called out, they lie about the lying. Trump did this on Wednesday after Robert Mueller contradicted several of the president's fictions about the Mueller Report. When PBS "NewsHour" correspondent Yamiche Alcindor pointed this out to him, citing Mueller's own words, Trump denied it and insulted Alcindor.

I'm often told that people are "numb" to Trump's noise and nonsense. But let's examine this for a minute:

Why is there not more outrage?

Some people, primarily fans of Trump, excuse or rationalize the lies for various reasons. Other people simply cannot. So much of the anti-Trump outrage from progressives and anti-Trump conservatives and columnists and pundits boils down to "He's deceiving you. He's lying to your face. Don't you care?"

And the press is right smack dab in the middle of this because advocating for facts gets you labeled "fake news." Which is, again, another lie.

Stelter is obviously implying something ideological, not something journalistic. To support Trump is to "accept lies." People who love Truth and Facts must oppose Trump with as much venom as Stelter.

Donald Trump has a casual relationship with the truth. He can keep "fact checkers" very busy. But Stelter doesn't seem to realize that if you support free markets and/or orthodox religious values against the Libertine Left and/or a strong defense and border control, you have one choice in the coming election. They're not going to be persuaded to #Resist by CNN hosts who offer supportive segments to socialists on "Is the Media Fair to Socialism?"

The subheads beneath this underline Stelter's anguished exploration of why Trump backers can be so willing to accept blatant falsehoods:

Rationales for the lies

Does the brain adapt?

Trumpworld even lies about the lies!

The lying should be front and center

You have to wade through this long rant about addle-brained Trump supporters before Stelter lets the actual "truth" and "facts" about Wednesday tiptoe in. He lets his colleague Oliver Darcy break the news that Mueller flopped: "Mueller's report might be damning, but his performance was anything but. His lackluster testimony -- during which he often appeared befuddled and confused -- actually aided Republicans and Trump allies in aiming to delegitimize Mueller's findings."

Stelter actually tweeted this during the hearing: "One tribe sees a fighter; another tribe sees a liar; any space in between?" Clearly, Stelter is a very activist voice in the Sees a Liar Tribe, pushing the liberal media to be more opinionated. They have to say "liar" and "racist" and "authoritarian." That's CNN, constantly providing a free messaging service for the #Resistance.