PolitiFact's Lame Hit on PJ Media: AOC Wasn't 'Crying Over a Parking Lot,' It Was a Road! 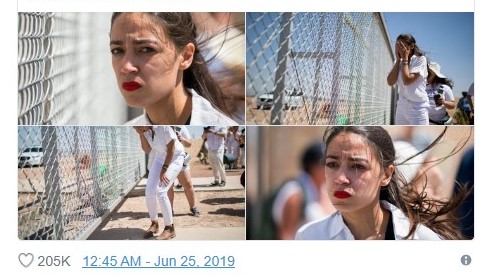 PolitiFact underlined its hypersensitivity to attacks on liberals on Monday by declaring a "Viral Image" of Alexandria Ocasio-Cortez to be "FALSE." The site tweeted:

Was @AOC crying over a parking lot while protesting family separation? False, she was standing on a road to a migrant facility, which was in her line of gaze, and was just beyond the port of entry.

"Fact" checkers Ciara O'Rourke and Stefanie Pousolides were upset with the Russian-puppet outfit RT and Jim Treacher at PJ Media for mocking the pictures. This is almost a month old, so you can't credit PolitiFact for responding quickly. This is one of their "Facebook fact-checks."

Since they are liberal AOC fans, they probably don't know Treacher writes with a humorous bent, and the headline is meant for laughs: "AOC Weeps Over Empty Parking Lot." They're not insisting she cried over parking spots. They're insisting she was staging photos far from the "action" being protested. She was striking a pose for the cameras, in the company of liberal celebrities including Connie Britton, Mira Sorvino, Bella Thorne, and Constance Wu.

Photoshoppers mocked AOC by putting her sobbing pose in front of a Chick-fil-A on Sunday. Carpe Donktum put Joe Biden smelling her hair behind her. Somehow PolitiFact didn't cite those images as "False."

Treacher cracked: "If you can look at those pictures without feeling this woman's genuine anguish and sincere concern for the plight of those people, I question your very soul. Obviously, whatever she saw on the other side of that fence was horrible and inhumane." He joked "Look at all that available parking space! [SOB]" 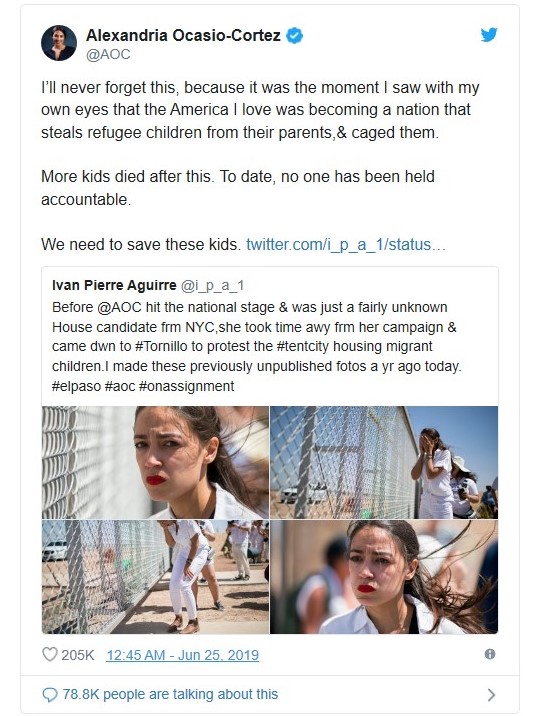 Paige Sullivan tweeted "So AOC was really just trying to get some stock border crisis images for Getty. The 'crying at the border' pics were just crying at cars behind a fence." She included a pic from Tom Elliott of Grabien: 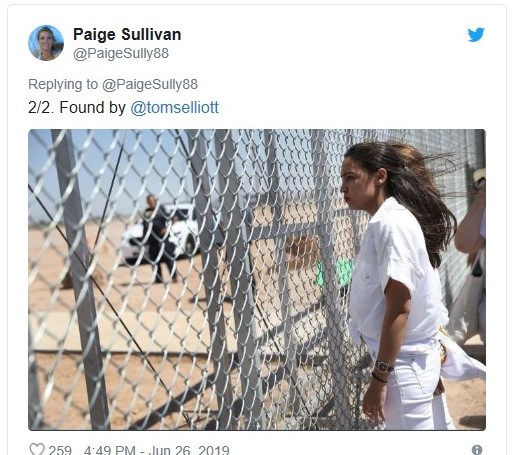 These "Fact" monitors then tried to investigate the humorous take on AOC's fence photos with the utmost seriousness, like it was a crime scene:

"I was there, and it was not an empty parking lot," Krantz said. "It was where the Tornillo camp was set up. There was a large demonstration outside that fence and that camp. The congressmen went inside for a tour."

Krantz also captured Ocasio-Cortez gripping the fence on June 24, 2018, and noted in her caption that Ocasio-Cortez "holds on to a fence outside the tent city." In an interview with PolitiFact, Krantz confirmed that Ocasio-Cortez was facing the facility in the photo, not a parking lot. Krantz said she, Ocasio-Cortez and others had passed through the port of entry before arriving at the fence.

Krantz also confirmed the fence in front of Ocasio-Cortez was positioned on a road that led to the facility, and that on either side of the road was a stone wall....

Daniel Borunda, a reporter for the El Paso Times who was at the rally on the same day, told PolitiFact that the tent complex was "visible in the distance several hundred yards away" from the fence.

That means AOC couldn't really see any inhumanity to weep over. They concluded:

A viral image of Ocasio-Cortez at a 2018 demonstration at a Texas town on the U.S.-Mexico border includes the caption, "AOC weeps over empty parking lot."

Photographers at the scene who took photos of Ocasio-Cortez say she was not facing a parking lot. Rather she was just beyond the port of entry for the Tornillo facility, and she standing on a road that led to the Tornillo tent complex, which was in the line of her gaze, as she stood at the fence. Pictures by other outlets also confirm the location.

We rate this claim False.

Treacher is the same wag who offered this memorable quote: "Modern journalism is all about deciding which facts the public shouldn't know because they might reflect badly on Democrats."

UPDATE: Fox News asked PolitiFact editor Angie Drobnic Holan for comment on the conservative reaction to this article. She said "We stand by our fact-check and consider it part of the important work we do debunking misinformation on the Internet."

"We work hard to present accurate, authoritative information to readers of all political opinions and viewpoints," Holan said. "Readers may sometimes disagree with a specific rating or report, but they gain knowledge from the report itself, and they understand that over the long term our mission is guided by editorial independence."

Holan asserted PolitiFact is "nonpartisan" and does not "take policy positions, so we never publish fact-checks to advance political points."

For completely missing the fact that PJ Media was engaged in satire, PolitiFact earns the rating "Half Baked." For more, see our Fact-Checking the Fact-Checkers page.