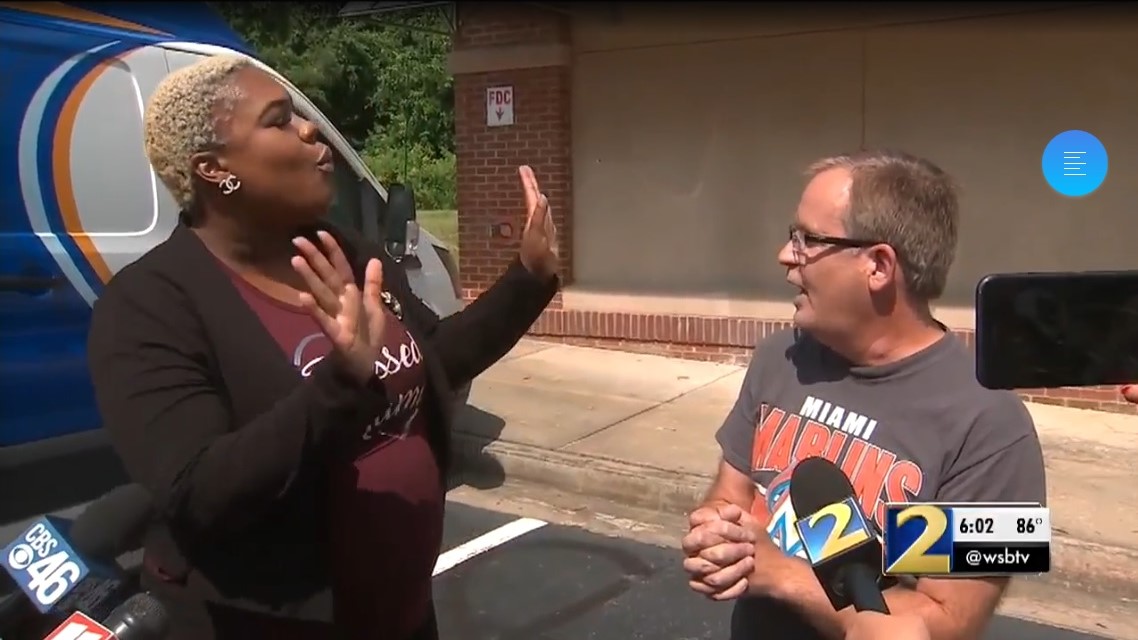 Our friends at Twitchy are having fun with the latest episode of Dubious “Hate” News – or #HateHoax – on Twitter. Georgia state Rep. Erica Thomas went viral over the weekend when she claimed a white man told her to “go home” when she had too many items in the Express Late at the Publix supermarket.

The “white man,” Eric Sparkes, who said he had Cuban heritage and always votes for Democrats, denied he said “go home,” but admitted he called her the B-word. Later, Thomas said “I don’t want to say he said, ‘Go back to your country,’ or ‘Go back to where you came from.’ But he was making those types of references is what I remember.” Then later, she insisted she was not walking anything back.

The fact that this local supermarket squabble became a nationwide social-media obsession when the so-called racist incident wasn’t proven is another sad occasion when people jump on narratives too fast. Take Rep. Ted Lieu on MSNBC on Saturday afternoon:

TED LIEU: For people to look at me and assume I'm not of this country can really is hurtful. I think so many people have now experienced that. And you just saw a video go viral today from Erica Thomas, she’s a Georgia elected official who was told to go back from where she came, and I think we’re seeing a lot of people experience that insult, and again, we’re all going to take action and we’re  going to vote in 2020.

RedState noted liberal eminences including Patty Arquette, Tom Arnold, Bill de Blasio, Ted Lieu and Beto O’Rourke joined the fray using the #IStandWithErica hashtag. Lieu then removed his. Conservative Twitter mocked The New York Times for putting out a story with this headline (even though the story included her back-tracking on the "go home" comment):

‘The Hate Is Real’: Black Georgia Lawmaker Says She Was Berated at Supermarket 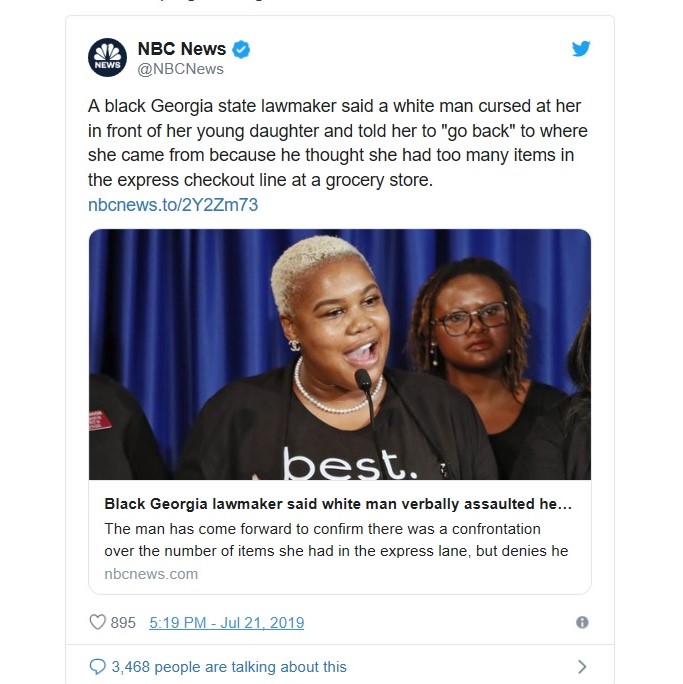 This claim was also a "Twitter Moment" on the weekend....before anyone has any evidence that the incident actually happened. It just matches the media fervor about "Go Home" too perfectly to resist.

At least the Trump-hating network newscasts haven't touched it, which is a sign it's half-baked.

UPDATE: The Atlanta Journal-Constitution reports the original report may have it backwards:

A Publix employee told a Cobb County officer that she witnessed part of the conversation and heard Thomas “continuously tell Eric Sparkes to ‘Go back where you came from!’” but did not hear Sparkes utter those words to Thomas....

Another Publix staffer, Derrick Tompkins, told police he heard Sparkes call Thomas an expletive. Tompkins told the Atlanta Journal-Constitution he didn’t hear him tell her to “go back” to where she came from...

In a statement on Tuesday, Sparkes said he wasn’t surprised that Cobb authorities decided not to file charges. And he blasted media coverage of the incident.

“Everyone that knows me knows that I am anti-hate, anti-bigot and anti-racism,” he said, adding: “Sadly, too much of media isn’t fact-checking items or they are just taking the word of a politician when they do a live Facebook or a Twitter post.”