The huge journalism museum called the Newseum is closing in December at its current location in the center of Washington, but it's going out in the usual liberal style: with a new exhibit paying tribute to Jon Stewart's 16-year fake-news tenure on The Daily Show on Comedy Central. In Friday's Washington Post, feature writer Rudi Greenberg touted all the (liberal) excitement: 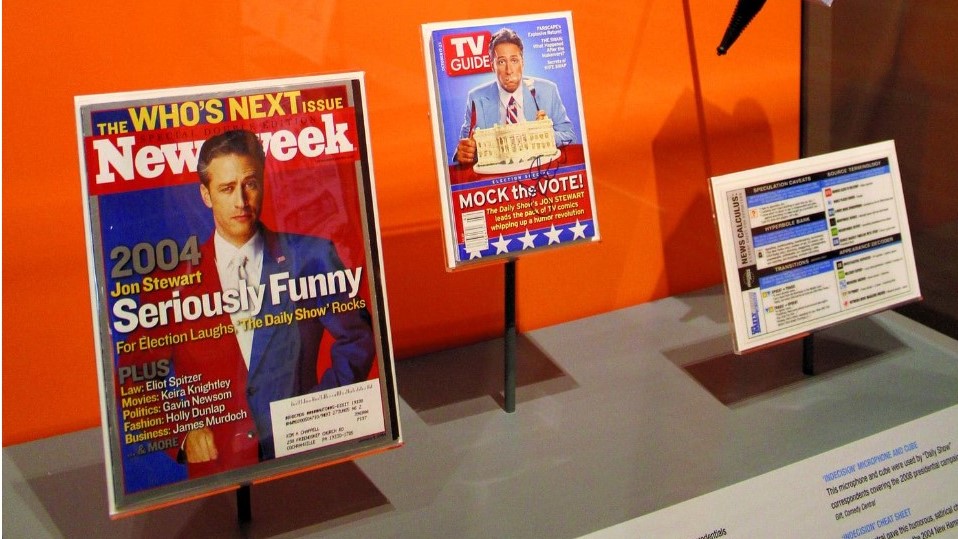 When Jon Stewart appeared in front of Congress last week to deliver his impassioned testimony on behalf of 9/11 first responders, it was a reminder of both the power of Stewart’s words and his influence on American politics.

For the Newseum, Stewart’s speech couldn’t have been more timely: On Friday, the journalism-focused museum will open “Seriously Funny: From the Desk of The Daily Show With Jon Stewart, ” which explores Stewart’s tenure at the iconic Comedy Central series, his lasting impact on news and comedy, and the careers the show helped launch.

The Newseum began planning this exhibit in 2015, when Stewart retired from The Daily Show and donated his desk to the museum.

“There has been no acquisition that the museum has had that has received more attention, more [people saying] ‘I want to see it,’” says Patty Rhule, the Newseum’s vice president for content and exhibit development. “The excitement is still there.”

Count us out. We could construct our own Rebuttal Room to Stewart's "iconic" status among liberals. If someone at the Newseum wanted a peek, we could suggest a few of our columns from the end of Stewart's tenure:

Bowing Before the Almighty Jon Stewart

Check Your Soul At 'The Daily Show'

But the Washington Post doesn't care what conservatives think. It was somehow a trusted "news" show when Rush Limbaugh was called a "quivering rage heap."

Using video clips from The Daily Show, quotes from entertainers and politicians, and objects used on the series, the exhibit makes a case for how revolutionary Stewart’s show was — how his brand of satire transformed the show into something that bordered on actual news. For example, the exhibit explains how Stewart hired real broadcast journalists to help with research and fact-checking.

“You really can’t have effective satire unless you’ve got the facts right,” Rhule says. “For a generation, he was their voice of the news.”

The Newseum website plays up this idea of Stewart as THE anchorman for his audience:

Stewart’s humorous take on the daily news — amplified by the arrival of social media and YouTube — made him the go-to source for information for a new generation of news consumers. Many viewers considered Stewart a more trusted source for news than actual broadcast journalists.

Greenberg concluded by letting Rhule imply that Samantha Bee and John Oliver and other alums are just putting a "twist" on the Stewart style. But these hosts in the Trump era are throwing more angry advocacy and less comedy.

“The people who were inspired by him have gone on to do shows that take that brand of comedy and social commentary and put their own twist on it,” Rhule says. “They are still making headlines today with the way they are challenging hypocrisy and challenging the press as well as politicians to do better — just like Jon Stewart did.”