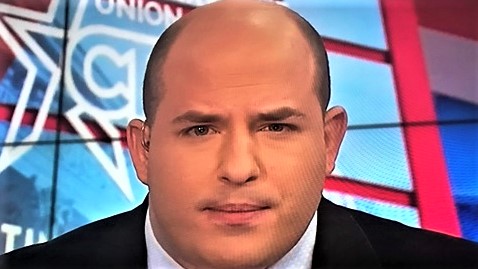 Axios reported that CNN media correspondent and Reliable Sources host Brian Stelter has begun a book about "Fox News in the age of President Trump, and Trump in the age of Fox." The publisher is One Signal, an imprint of Simon and Schuster. The publisher says the book will come out in 2020 and look "behind the scenes of a TV network and a White House merging in unprecedented fashion."

Really? Stelter couldn't have written a book about "MSNBC in the age of Obama, and Obama in the age of MSNBC"?  As usual, because an Obama has thousands of media people eagerly wanting to "merge" with his vision and strategy, it's just not the same. Democrats and the media strategizing together is the precedent. It can't be "unprecedented."

It sounds a lot like a Stelter commentary on CNN last summer, as our Nick Fondacaro reported at the time:

“Fox and Trump, Trump and Fox. You know they're close. But do you realize just how close?” He then declared “this kind of relationship has never existed between a U.S. president and a TV network. It is unprecedented. It's sort of a love story, so let me count the ways,” he mocked.

"First of all, the President loves Fox. He loves what he hears on Fox. He promotes the network and trashes its rivals. Telling people when and where to tune in. A president has never endorsed a network like this before. Trump watches Fox and tweets about it and watches some more. Sometimes he hears valuable information but other times he hears terrible misinformation. Sometimes he then spreads it in interviews on Fox and around and around we go."

Stelter decries a conservative "hate movement" against CNN and other liberal media outlets, but we could use his lingo and call this a "hate book." Julia Cheiffetz, publisher of One Signal, said in a statement “You can’t understand America right now without understanding the role of Fox News, and no one is better positioned to tell that story than Brian Stelter.”

They're promising Stelter's Fox reporting will go all the way back to his writing for the blog TVNewser while he was a college student at Towson University near Baltimore. Three years ago, Stelter claimed Fox News spied on him by sending a low-level staffer to date him and get intel. Let's bet that story makes the book.

He added: “Because I was a reporter on the beat, they were actually spying on me that way. Now I didn’t think that was a big deal at the time. I thought it was the way Fox operates. Fox is a political organization. But now we know they were actually sending out private investigators. They were tailing other reporters.”

Stelter also tweeted "Fox PR (wisely, I think!) paid a lot of attention to my blog."

Stelter's first book — Top of the Morning, about the network TV morning shows — hit the New York Times bestseller list in 2013 and is now being used as background for an upcoming Apple TV drama on morning programs.