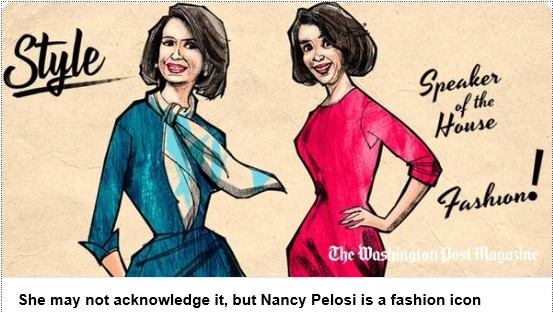 Sunday's Washington Post Magazine carried a sugary article by freelancer Christina Binkley headlined "She may not acknowledge it, but Nancy Pelosi is a fashion icon." It began with socialist Barbara Ehrenreich, who thinks Pelosi is too "centrist," but she had to give her fashion props:

She described Pelosi’s swearing-in dress — which is really more fuchsia than red — as a metaphor for her complicated feelings about the House speaker. “I don’t actually wear dresses,” she said dryly, but Pelosi “looked great. And I thought, wow, she’s really coming into her own.”

And then Hollywood adds heft:

As she strode out of the White House looking victorious in a brick-red wool coat and sunglasses, having baited President Trump into taking responsibility for the coming government shutdown, she tipped her sunglasses. Her swagger went viral. So did the coat.

“Has anybody figured what coat this is she’s wearing?” tweeted Barry Jenkins, director of “Moonlight” and “If Beale Street Could Talk,” in a thread that revealed him to be as passionate about clothing as he is about Pelosi. He wrapped up: “She knew exactly what she was doing wearing THIS coat on THIS day coming out of THAT room, placing THOSE shades on JUST so. This is diplomacy in motion, soft power wielded like a machete through the diligent, decisive act of dressing.” (Jenkins did not respond to several interview requests.) Asked by Elle magazine whether the red coat was a deliberate choice, Pelosi said, “I had no plan or intention; it was just clean. Clean should be the first criteria.”

It ended with the usual "badass" sludge:

Shannon Watts, founder of the gun-control advocacy group Moms Demand Action, admires the way Pelosi’s suits often match her “killer heels” in bright tones. Yet none of that would matter if Pelosi weren’t a skilled — and, at the moment, highly successful — politician. “Speaker Pelosi stands out in every room she’s in mainly because she’s a brilliant badass,” Watts notes. Indeed, it’s certainly no coincidence that Pelosi’s fashion cachet increased at her moment of political triumph — a hard-fought return to the speakership that required her to lead the Democrats to victory last November, then survive a rebellion within her own ranks.

And it isn’t just her clothes that are inspiring imitation. Lauren Mechling, a New York-based author and editor, noted recently on Twitter that her mother had asked her hairstylist to make her “look like Nancy Pelosi.” It was a joke — sort of. “She respects [Pelosi],” Mechling explained in an email. “A well-coiffed hero!”

Thank God for @washingtonpost. This is the kind of journalism that will save the republic. Democracy dies in darkness, or something.

Also, @FLOTUS is LITERALLY a supermodel and the fraudulent, corrupt Democrat Media Complex won't refer to her as a "fashion icon." God these people suck.

When she sent out photos of an event hosting children of Secret Service members in the renovated White House bowling alley in her "Be Best" branded shirts without any shot with her face in it, "It's not just a missed opportunity, say experts; it's a complete miscalculation of the role."

As if the Washington Post would assist in the First Lady being a traditional "messaging tool" for the president they profess is putting democracy in the darkness.