Stelter on Buttering Up Crooked Avenatti as Presidential Timber: 'I Own That Comment'

Washington Post media blogger Erik Wemple tried to comb through the wreckage of Michael Avenatti, liberal cable news sensation-turned-potential crook, on Thursday night. Avenatti told Vanity Fair he "flew too close to the sun," like the mythical Icarus. Wemple noted that at one point, Rachel Maddow was putting Avenatti on air not discuss what he had done, but what we was preparing to do during the Brett Kavanaugh hearings. Wemple measured Avenatti's "ubiquity" with our research:

By the count of NewsBusters — a conservative-leaning site that tracks the mainstream media — the Maddow-Avenatti moment was among 254 TV news appearances turned in by the telegenic lawyer over a year starting in March 2018. Cable watchers are familiar with his landing pads: CNN accounted for 121 Avenatti appearances, with MSNBC right behind at 108. They have no rivals in this category. Fox News hosted two appearances.

He also asked cable-news hosts to defend themselves on why they gave him such an enormous number of appearances -- MSNBC did seven on one day in 2018. Wemple included a Free Beacon video medley of Avenatti suckups. CNN's Brian Stelter -- so easily mocked for touting Avenatti as presidential timber, based on his cable ubiquity -- complained there were "bad faith arguments" about this, but didn't cite any: 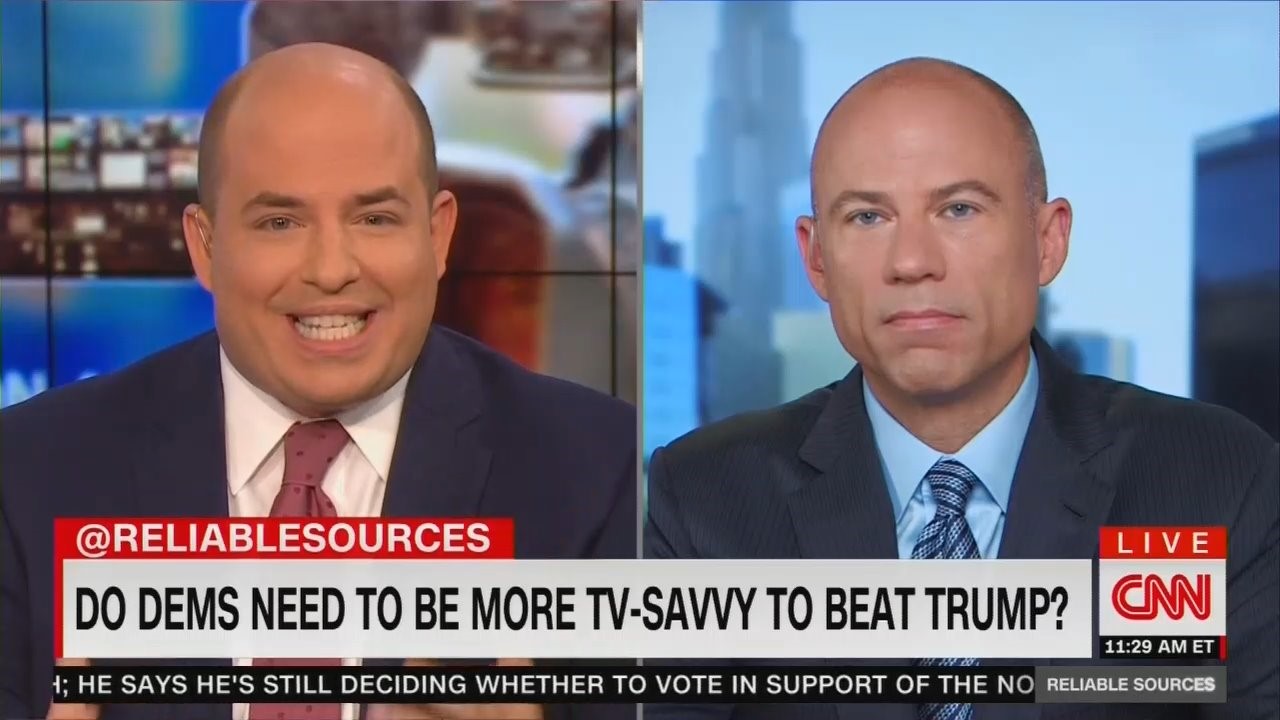 There are lots and lots of reasons why Avenatti was newsworthy when he was representing Stormy Daniels. Journalists did their jobs and questioned him — some more effectively than others. Critics are doing their jobs and questioning the coverage — and that makes all of us better. But bad faith arguments make us all worse off. Some folks have been distorting my comment last September about Avenatti. My thesis back then, which still holds, is that all future US presidents will be television stars of some sort. TV star power will be a prerequisite for the presidency. [That's why] I told Avenatti "one reason I'm taking you seriously as a contender is because of your presence on cable news."

Obviously I'm not taking him seriously anymore, but I own that comment. He showed a Trump-like mastery of the media last year. I think there's been a lot of introspection in newsrooms about the reasons for that mastery. I think what’s most important now is that the cases against him are covered fairly and thoroughly, not soft-pedaled by people who previously interviewed him OR sensationalized by people who dislike him.

MSNBC's PR department insisted it was exactly as guilty as Wemple's paper: "Similar to The Washington Post’s more than 200 citations of Michael Avenatti in its ongoing and in-depth coverage on the topic, we appropriately covered a high-profile legal matter surrounding the President of the United States and, as part of that, invited Mr. Avenatti to represent his client."

Maddow also sent a statement defending herself, insisting she had "no regrets" about pushing Julie Swetnick's unproven accusations against Kavanaugh, and this was the most quotable part:

Now since then, according to the allegations laid out by prosecutors, Avenatti turns out to have been a shrieking bag of cats when it came to his business practices more broadly. But the fact remains that the [Stormy Daniels] campaign finance story he brought to the fore resulted in federal charges, a guilty plea, a prison sentence, and prosecutors implicating the President of the United States in directing the commission of two felonies.

Wemple also interviewed Avenatti, who naturally bragged he was everywhere because "I was credible and I was incredibly effective." Avenatti says he turned down more than 60 percent of the requests from CNN and MSNBC! Imagine that.

Wemple was kind enough to quote me in the article:

Tim Graham, executive editor of NewsBusters, saw a melding of sensibilities at work. “The obvious point at the end of this is it underlines how you can be a star if you say the things they want you to say,” says Graham, referring to MSNBC and CNN. “If he’s Icarus, who gave him the wings?”