We've been told in recent years that to be critical of the news is to be critical of democracy itself. So it was a bit shocking that in the newspaper that screeches on each front page that "Democracy dies in darkness" ran its own columnist asking "Do we owe it to society — and ourselves — to tune out the news?" In Tuesday's paper the headline dropped the question mark: "Our new civic duty: Tune out the news."

Post columnist David Von Drehle hailed himself for doing "quite a brave thing" in writing this article. 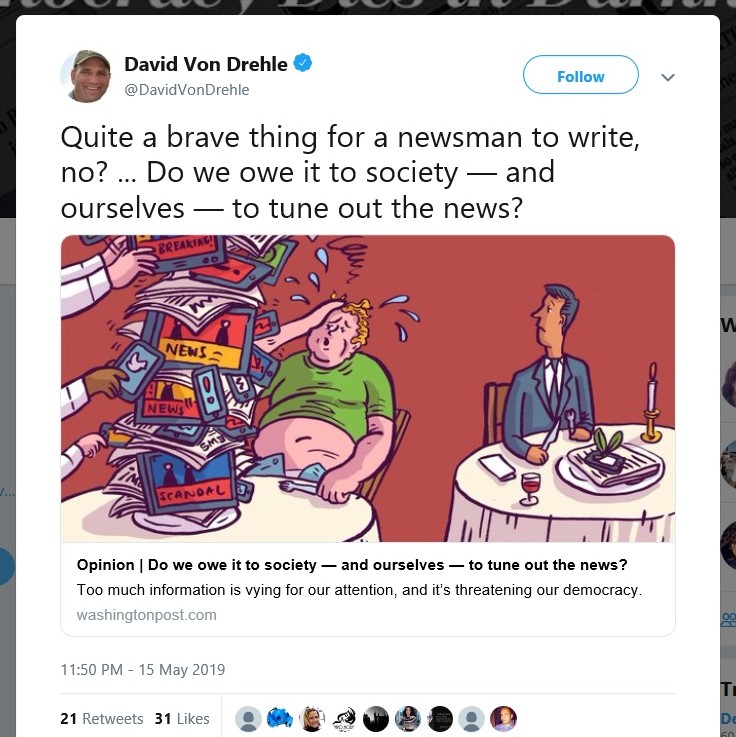 For decades now, some theorists have written about information overload, and now you can add to that how social media hands you the information that you seem to crave. Von Drehle writes about an Oliver Burkeman article in the U.K. Guardian:

Fed an endless diet of information tailored just for us, we can easily fall into a distorted version of the world. Just as easily, we can find others through social media who share and reinforce that view. We get the feeling that each day’s news confirms our worst fears and begin to wonder whether the world is coming unhinged. All of this is a function of information merchants trying to seize our scarce attention and hold it as long as they can.

“It’s easy to assume that the reason you spend so much time thinking about the news is simply that the news is so crazy right now,” writes Burkeman. “Yet the news has often been crazy. What it hasn’t been is ubiquitous.”

The danger is too much cynical horror: "If and when our obsessions with news feeds sour life and weaken the community, a citizen’s duty is to tune out."

Von Drehle used the example of fast-traveling news about a bigoted statement made in a small town in Georgia, something no one would know about without the current information overload. Does this matter much outside one small town?

This news economy flattens the importance of information. A bigot of great power or influence is an important story; a bigoted councilman in a town smaller than my kid’s high school — not so much. But news algorithms will feed reports of bigotry endlessly to news consumers with an appetite for them, whether the example is large or small.

What's fascinating here is that Von Drehle isn't really admitting The Washington Post is part of this system, pandering to liberals and reinforcing their biases! The Post somehow doesn't drive Trump panic and horror... 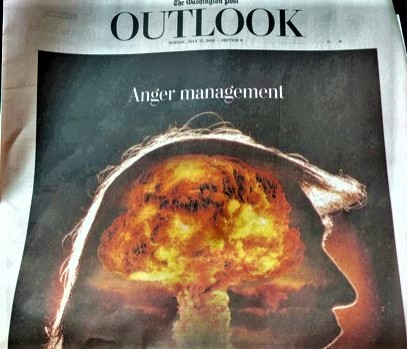 “When the news is hard to come by,” he counsels, citizenship means seeking it out. But when the glut of information drives us apart, the good citizen must put forward effort to avoid the excess and elude the algorithm.

This is because information merchants pander to and reinforce our biases. Their job is to hold us rapt as long as possible. “These new incentives favour horse-race politics and hot-button culture-war issues,” Burkeman writes, “plus rapid-fire argumentative ‘takes,’ designed to confirm readers’ existing prejudices, or trigger scandalised disagreement.”

Who wins under such circumstances? Demagogues, narcissists, shills and stars: those who succeed by dominating our thoughts and riveting our focus on themselves.

Say, with newspapers with panicky front pages that cry "Democracy dies in darkness." It's a slogan that drives the feeling that "confirms our worst fears" and might make one "wonder whether the world is coming unhinged."