Sometimes, the fact checkers pick the wrong fact to check. See Snopes.com on Joe Biden. Their latest Biden article explored whether Biden actually said he had "no empathy" for the young generations. Snopes was aiming low by fact-checking a tweet by a left-winger's account that had 958 followers. "IbrahimAS97" described himself as "a person within whom a profound hatred of centrist democrats resides." The tweet did resonate on Twitter (before or after Snopes arrived on the scene?): 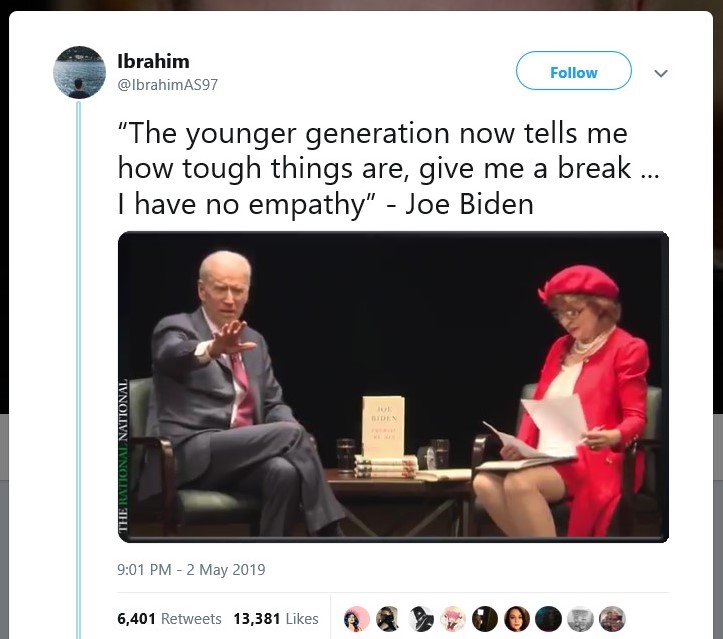 They rated that a "Mixture." Yes, Biden said he had "no empathy" for the young, but hey, "Biden was making a specific and emphatic comparison between the relative progress and civility of the present moment, on one hand, and the upheaval and civil discord of his own youth, in the late 1960's. He was not speaking in general or absolute terms."

They made a transcript of Biden's remarks to Los Angeles Times columnist Patt Morrison. Can you notice the real crime against facts here?

You know, shortly after I graduated in ’68, Kent State, 17 kids shot dead. And so, the younger generation now tells me how tough things are — give me a break! [Audience laughs and applauds]. No no, I have no empathy for it. Give me a break. Because here’s the deal, guys — wwe decided we were going to change the world, and we did. We did. We finished the civil rights movement to the first stage. The women’s movement came into being. So my message is ‘Get involved.

The whopper is Biden claiming "17 kids" were killed at Kent State. He only exaggerated by 13. Maybe that should have been the point of the article?

The sliding scale of Snopes "fact checking" can be shown by another recent post on something recent Federal Reserve Board nominee Stephen Moore (a friend of the MRC) said at hth 2016 Republican convention in Cleveland:

Conservative commentator Stephen Moore once said: "I'd get rid of a lot of these child labor laws, I want people starting to work at 11, 12."

Snopes rated that "True." No "mixture" for context, no claim he wasn't speaking in "absolute terms." Here's a larger chunk of the quote:

The big decline in labor force participation has been people between the ages of 16 and 30, and that’s highly problematic because if you don’t start — the statistics are very clear on this — if you don’t start — look, I’m a radical on this. I’d get rid of a lot of these child-labor laws, I want people starting to work at 11, 12. It’s amazing how many people I meet who are successful … who grow up on a farm and started working on the farm at age 10, 11, 12 years old, where you learned a work ethic.

In context, this quote isn't some defense of children working 12 hours a day in factories. Some of us were delivering newspapers at 12 years old. (Imagine! Newspapers exploiting child labor!)