Jeffrey Cimmino at the Washington Free Beacon reported that CNN's Nick Watt touted the last doomsaying United Nations report on climate with one of the most debunked doomsayers on Earth: Stanford professor Paul Ehrlich, who wrote the silly 1968 book The Population Bomb. "The battle to feed all humanity is over. In the 1970s, the world will undergo famines -- hundreds of millions of people are going to stave to death in spite of any crash programs embarked upon now."

"For a species that named itself homo sapiens, the wise man, we're being incredibly stupid," Ehrlich grumbled in Monday's report. What's incredibly stupid at this point is trusting that Ehrlich is the man with the answers.

Watt touted the last doomsaying report from the UN with no rebuttal: "The human population has doubled in just 50 years, our agriculture consumes more and more land, natural habitats are shrinking, we continue to pollute, the climate continues to warm, and natural ecosystems crumble at an accelerating rate. 145 leading experts from 50 countries spent three years compiling this gargantuan report, reaching frightening conclusions."

It sounds a little like Nancy Pelosi discussing the Neil Gorsuch nomination on CNN, saying it was a terrible pick if you "breathe air, drink water, eat food, take medicine." 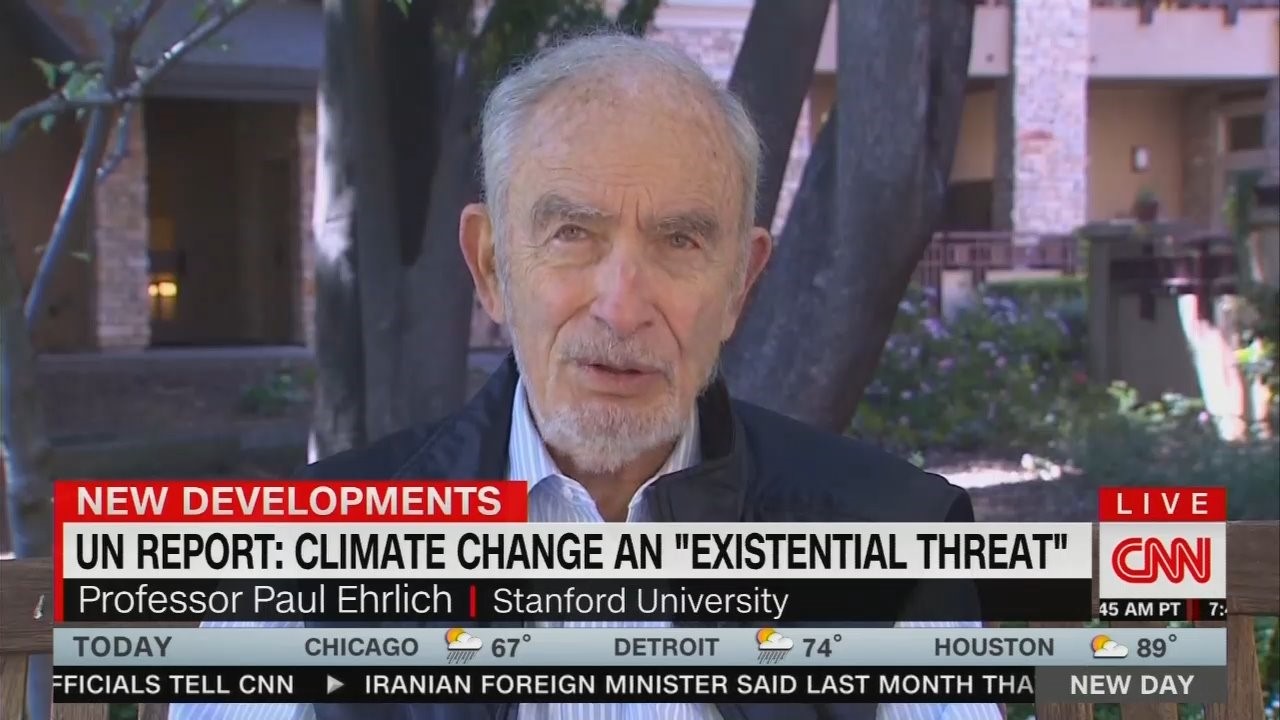 Thirty years ago, in our newsletter MediaWatch, we noted Ehrlich had the same message on NBC's Today. Has it come true? "We're going to massive extinction," he warned. Global warming would cause a flood that "we could expect to lose all of Florida, Washington D.C., and the Los Angeles basin...we'll be in rising waters with no ark in sight." In fact, he insisted that "the ecosystems of the world cannot support the spread of the American lifestyle to the Third World, or even the next generation of Americans."

How did that turn out?

CNN aped Ehrlich's The Population Bomb in a monthlong series in 1992 called The People Bomb. Ehrlich then told CNN viewers "the birth of a baby in the United States is on the order of 30 times as big a disaster for things like global climate change, the ozone layer, acid precipitation, and so on, as a baby born in a poor family in Nepal, Bangladesh, Colombia, or whatever."

CNN had failed then to tell viewers that in 1980, Ehrlich bet economist Julian Simon (author of the book The Ultimate Resource) that five natural resources of Ehrlich's choosing would grow more scarce -- and therefore expensive -- by 1990. Ehrlich lost on all five counts. CNN admitted they knew this, but told us the man who got it right....was outnumbered by other scientists!

"Facts First." A hilarious CNN slogan now, and back then.