TIME magazine in recent months has published a series of puffball cover stories for Democrats from Nancy Pelosi to Alexandria Ocasio-Cortez. Now it's time to celebrate Pete Buttigieg, next to the husband Chasten Buttigieg, with the words "First Family" on the cover. Doesn't it seem a bit early for that kind of hype? But the gay pride was overwhelming. Paul Moakley -- Editor at Large, Special Projects at TIME -- bragged about the project and thanked the couple on Instagram: 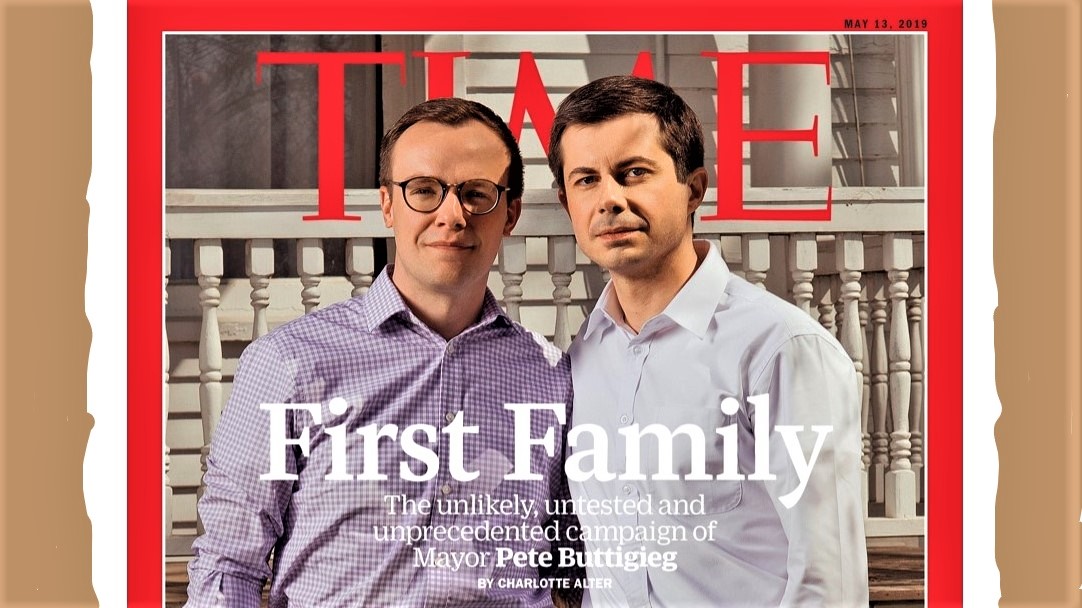 Growing up as a gay kid in a conservative community at the height of AIDS, I never imagined I’d be producing the covers of @time, especially one with an openly gay presidential candidate. Thank you to @pete.buttigieg and his husband @chasten.buttigieg for opening their lives and home to us. Thanks to everyone in our incredible crew: photographer @ryanpfluger (who’s worked for for many years and finally has a cover), photo assistant @nicolbiesekphoto, writer @charlottealter, video crew @dianetsai_ and @francescatrianni, and cover design by @dwpine. #pride #time #petebuttigieg #firsts

Writer Charlotte Alter begins a very long cover story with Buttigieg being heckled in Iowa by The Devil, so to speak:

Buttigieg ignored the heckler, plowing forward with his stump speech about American decency as his husband ­Chasten looked on. “Pete,” the Devil whispered. “I want the heartland, Pete.”

The man in the devil costume was Randall Terry, an antiabortion activist....

Terry is hardly the only right-winger worried about the rise of “Mayor Pete.” Buttigieg’s saying that “God doesn’t have a political party” prompted evangelical leader Franklin Graham to tweet that being gay is “something to be repentant of, not something to be flaunted, praised or politicized.”

In a video, Alter described Buttigieg as "openly gay, happily married, a veteran who served in Afghanistan" and a "devout Christian." She repeats later that Chasten is a "big political asset because it allows him to position himself as a happily married, devoutly Christian family man who happens to be gay." She asserts that "his marriage symbolizes what is politically possible in the United States of America."

Alter makes a big deal of how Buttigieg "roots his campaign in an effort to reframe progressive ideas in conservative language." He says his approach is to “to stick to your ideas, but explain why conservatives shouldn’t be afraid of them.” But he's also listed as favoring radical ideas -- abolishing the Electoral College, expanding the number of Supreme Court justices, "Medicare for all who want it" and the Green New Deal is "the right beginning." That's pretty hard left.

But Alter concludes: "In the end, Buttigieg’s biggest gamble is his bet that voters are sick of a divided America and hungry for reconciliation. He believes independents and moderate conservatives could get behind a happily married Christian veteran. And he may be right."

Wishful thinking is defined as "news."