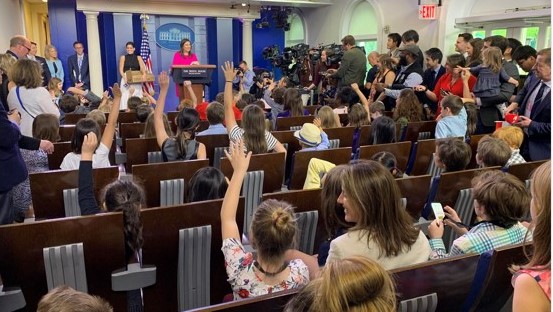 The White House held a kind of Fake News briefing on Thursday for the children of White House correspondents and White House employees on Take Your Daughters and Sons to Work Day. That sounds cool for the kids, but Washington Post media blogger Erik Wemple used the occasion to trash Sarah Sanders & Co., and their failure to host press briefings in 2019.

One correspondent told the Erik Wemple Blog that the White House did a lot of work to welcome the children and provided them an excellent experience.

Among the important lessons gleaned by the junior correspondents was the centrality of nonaccountability mechanisms in the affairs of state.

They announced the briefing was "off the record," meaning no audio or video, although there were still photographs. Wemple said Sarah Sanders was asked about the president's favorite colors -- she said red, white and blue. There was also a question on "what to do about climate change — we want clean air and clean water without slowing down the economy, came the answer."

Wemple ran tweets from White House reporters like CBS's Weijia Jiang, who shared the Wemple hot take: "Kids of WH Press Corps members are getting ready for a briefing with @PressSec. Their parents have not had one in 45 days."

When the children head home tonight, perhaps they can pull up archival footage to see how their questions stack up against ye olde press briefings. Tuesday, after all, marked a record for number of days without a White House press briefing. Accordingly, Sanders was doing more than just providing a fun interlude for the kids; she was headlining a reenactment, anchoring a bona fide historical site.

The liberal reporters never ponder that maybe one reason there are fewer briefings are the obnoxious behavior by the press -- think Jim Acosta yelling and refusing to surrender the mike. It's maybe surprising Acosta didn't enlist one of his kids to yell at Sanders today.

We enjoy these combative briefings, since they demonstrate Acosta sounds more like a Democrat running for president than a reporter. Facts don't come first. Acosta wins awards for his charade, which only underlines that the press doesn't understand why they're unpopular and why their credibility is eroding.

But wait, on January 11, a Washington Post blogger noted "President Trump is extremely accessible" for the press. Who was that? Oh, Erik Wemple! In the first two years, Donald Trump engaged in 338 "pool sprays" or short question-and-answer sessions, compare to 75 for Barack Obama. "The decision to engage the media in Q-and-A banter is entirely discretionary, yet Trump does it incessantly."