On Sunday's AM Joy on MSNBC, leftist activist and movie director Rob Reiner desperately clung to shreds of hope that someone might still recognize that Donald Trump is a crook that needs to be impeached. "Meathead" has dramatically changed his spin to suggesting special counsel Robert Mueller had a "very, very narrow charge" to investigate.

That's funny. In 2017, Reiner tweeted "Soon there will be only one rat left on the sinking ship: A big lying childish racist one. And Mueller has enough extermination equipment."

JOY REID: A lot of people put everything on Robert Mueller. A lot of people in the Resistance said Mueller will save us, and then when the report from William Barr came out, the conflation of that with the Mueller report sank a lot of people's spirits.

ROB REINER: Well, we haven't seen the report, so we don't know what's in there. But Mueller had a very, very narrow charge. One was to find conspiracy, whether or not there was, and the other was to discover whether or not there was obstruction of justice. Conspiracy is a very, very specific crime, and it requires a quid pro quo. It requires cooking up something, they are going to cook something up. That may or may not have happened, but in order to find out whether it happened, it takes years of counterintelligence investigation to figure that out. But put that all aside. I'm going to make it very simple. Forget -- we don't know what's in the report and we'll find out. But what we do know is right there in front of us.

I robbed a bank. I robbed a bank. I come to you and I say, I robbed this bank. Can you hide me and don't let anybody find me? And you say, okay, and you hide me. This is what happened. The Russians robbed the bank. They stole something. Trump was told, hey, they robbed the bank. If you find out, you gotta let us know because they are going to try to disrupt our election. And you go [silent], you don't say anything. You know you've hidden the criminal, and you don't say anything, so you're aiding and abetting a crime, you're an accessory after the fact and obstructing justice by not telling the authorities what you know. And Trump's campaign was -- they were briefed. They knew that the Russians had committed a crime, and they hid it from the public, what they knew.

REID: Because they were benefiting from it.

REINER: They were benefiting from it. So that's a very simple way to look at it. And that we saw. All that happened.

This wasn't exactly Court TV, and Reiner doesn't even play a lawyer on television. He's sticking with describing Trump as an "autocrat," despite the fact that he never fired Mueller -- or his overseer, deputy attorney general Rod Rosenstein -- as well as other "autocratic" moves the media constantly speculated would happen.

On Twitter, Reiner is still claiming "Collusion & Obstruction in plain sight!...Trust Your Eyes!" 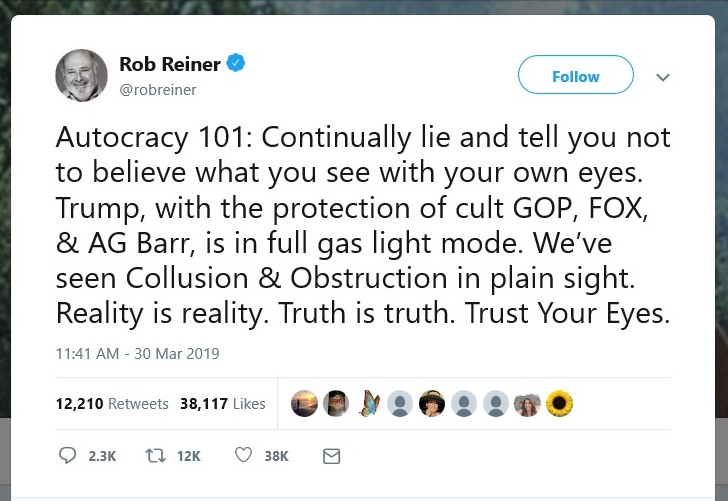