Yashar Ali of HuffPost published an eye-opening thread on Twitter Friday accusing an NBC/MSNBC political editor of "bullying him" on behalf of the Democratic National Committee to delay an "innocuous" debate-schedule scoop he'd been given. Ali began: 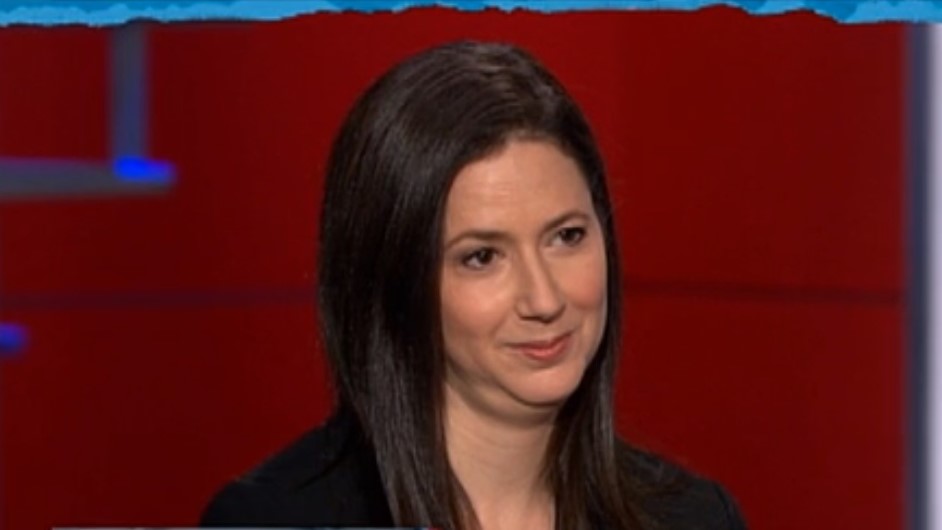 Yesterday, I received a call from @DafnaLinzer who serves as managing editor of NBC/MSNBC politics. Dafna's conduct during the call was highly inappropriate and unethical. So what was the purpose of her

She called me to bully me on behalf of the DNC.

Dafna, who oversees the political coverage for NBC and MSNBC, was calling to bully me into delaying the publication of an innocuous scoop and at no point did she advocate for her network, it was only about the DNC.

Ali said a "trusted source" told him the DNC would be announcing the dates of the first 2020 primary debates later that day. The source gave me the dates they would be announcing: June 26 and 27. When he called Democratic presidential campaigns, he learned they did not know yet -- he had a scoop. A small scoop. But everyone loves being First.

He asked the DNC if the tip he received was accurate and they asked if they could call back in 10 minutes. A few minutes later they called back and asked if he could delay posting the scoop so they could notify state party organizations first.

Here is the tweet that kicked off the thread: 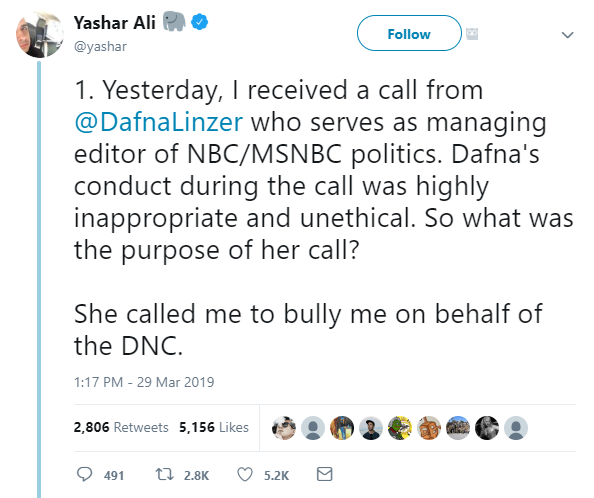 More of the tweets below:

I told them I couldn't wait as the news would leak and leave me without a story. That's all I can say about the call. Two minutes later I received a call from Dafna.

I've never spoken to Dafna by phone. A couple years ago she reached out to me to see if I wanted to have coffee and talk about working at NBC News but I declined as I was actively investigating NBC matters and thought it would be strange if I discussed a job.

So when I saw Dafna calling I assumed she would ask me to consider delaying my post so that MSNBC could announce it first. Given that this was an innocuous scoop and not some investigative story I wouldn't have lost sleep if I had delayed. But that's not why she was calling.

After exchanging pleasantries, Dafna told me that she received a call from the DNC and was told I had a story. Now it's not strange that the DNC called her, they were coordinating an announcement. What was strange was that she was calling me and taking a menacing tone.

She asked if I could hold the story and I said I couldn't. She was agitated, "why not?" I said I'm not going to lose a scoop. Then she got angrier and said "Why not? It's not a big deal, let them make a few phone calls."

I thought to myself "this is how people think it works." It's not. But Dafna was doing it. She kept pressing me. Now I acknowledged, for stuff that isn't about serious investigative reporting, there is no problem holding something. But I knew once others got the call I would lose a scoop. Dafna reminded me she was a nat sec reporter at WAPO [Washington Post] for ten years and they would hold stuff all the time (note: so people wouldn't get killed). "Why can't you just wait, let them make their calls, then you'll be the first to put it into print," she said

....Then she sent me over the edge and said "What's your editor's name, I want to talk to them." She was trying to intimidate me..on behalf of the DNC. I ended the call.

After the call with Dafna I published the stupid scoop. Then I did a gut check and over the next two hours I called 10 experienced prominent reporters and told them the story. They were all stunned by what Dafna did and encouraged me to share it publicly.

Ali wrapped by acknowledging that the "press haters" were going to spread this tale widely. "I'm not naive to the fact that this incident is going to be twisted by some with an agenda to discredit the media and say they collude with political parties. But I think its more important to expose bad behavior then keep it under wraps. What Dafna did was unethical."